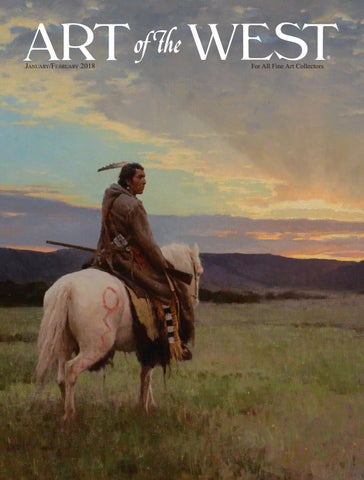 Passion and Prestige By Clover Neiberg

hen you finish reading this article, take a moment to clear away all the background distractions you’re able to eliminate. Open the magazine, or your browser, to one of Z.S. Liang’s paintings. If you’re a collector fortunate enough to own one of his works, go stand in front of it. Take in, for a few minutes, the sun-washed faces and the buckskin-clad figures, the moody skies and the red earth, the fur-trimmed clothing and the high-spirited horses, the surrounding scenery. Do your best, knowing what you know about Native American history, to piece together the story you are witnessing.

Every element of Liang’s pictures tells a story. Are those dark clouds on the horizon moving closer, or away? Look at the way the grass is blowing, and you’ll know. What is the Indian chief communicating with that sidelong glance? Re-read the title of the painting; it might offer a clue. What is the significance of the tie around the horse’s tail? You might have to do a little research to figure out that one. Liang, an avid historian with an artist’s technical skills and a great storyteller’s keen eye for the nuances of human behavior, lives for these kinds of details. “I could keep talking all night,” he tells me, after he’s talked me through the fine points of several of his recent paintings. I not only believe him but wish I had enough coffee to take him up on the offer. His enthusiasm for his subject matter is palpable and contagious. “If you’re going to paint American Indians, first of all, you have to have a passion for their culture and history,” Liang says. “You have to really learn, and you have to talk to these people and become a friend with them. I went a long, long way, from the East Coast to the West, from the Rockies to the Southwest— to become friends with many different tribes over all these years. And also, I learned the history from them and from books and from the museums.” When Liang says he traveled a long way to establish the strong ties he enjoys with his community of Native American friends, it’s no exaggeration. His journey began halfway around the world, in the People’s Republic of China, and has taken him throughout the United States in the years since he arrived here as a young man to study art in Boston, Massachusetts. Liang was born into an artistic family. Although they were materially poor, his memories of their spartan existence help him to identify with the frequently austere way of life of the people he depicts in his paintings. “For me, as a Chinese, I felt a sense of kinship with them,” he says. “I grew up in a very poor family, and we did not waste anything—even a piece of wood, you know, you can catch and collect for firewood. We never wasted anything. We lived in the city, and we ART of the WEST • January/February 2018

Above In Quest of the Cree, oil, 42” by 60” “In the mid-19th century, a Southern Piegan camp was attacked by the Cree, a neighboring enemy tribe, who took their white otter quiver and bow case. The deeply sacred powers held within these weapons were difficult to replace. The humiliation felt by the Piegan grew deeper with each passing moon. Chief Mad Wolf was, therefore, determined to seek revenge against the Cree and retrieve the sacred objects.” Preceding Pages Lone Rider, Milk River Valley, oil, 36˝ by 54˝ “Morning dawns in the Milk River Valley. The return of spring finds everything in Mother Nature in good spirits. An Assiniboine band chief looks for a good location for his people to camp, with the hope that the buffalo will soon return.” Opposite Page The Brother In Law, oil, 38“ x 26” In the fur trade era, a white man marrying an American Indian woman was not uncommon. This fur trader is offering a flint lock trade gun to his brother in law. The artist leaves a hidden question: Who wants to claim the other as their brother in law?

Grizzly Bear Man, oil, 44˝ by 28˝ “Every year, in the Blackfeet Brave Society, two men were chosen as ‘grizzly bear men.’ They had to be fierce warriors, who fought like grizzly bears. This grizzly bear man had a grizzly claw necklace and mountain lion pelt quiver. His war shirt was perforated, the holes symbolizing bullet holes, which means that the wearer was so brave, and his spirit was so strong, that even bullets could not kill him. His quirt was made out of a buffalo hump bone.”

were always making food and always hungry. We raised chickens on the rooftop for the eggs. Basically, we fed the chickens with leftover stuff and grass and whatever we could get. And then we eventually had the eggs.” Despite their poverty, his family was steeped in artistic culture. His father created woodcuts of scenes related to World War II. In fact, some of his works were purchased by writer Pearl S. Buck and reproduced in one of her books. His mother was a gifted musician. From a young age, Liang was encouraged to pursue his artistic interests. In China, Liang’s career path was a relatively narrow one. “I was trained in social realism,” he explains. “Your paintings basically just glorify the government—propaganda posters and such.” That training and work provided him with excellent technical skills and a particular knack for capturing faces, but encouraged little in the way of creativity. As the Cultural Revolution gathered momentum, Liang and his contemporaries were exposed to art from the United States and other Western nations, and he found these new influences revelatory. “I considered myself a good painter, a realistic painter,” he says, “but then China just opened up to the world and the West—American culture in China, books and movies and everything. The Chinese embraced American culture. At that time the government was very open to the new culture, the new science and technologies and everything, because there were so many things they wanted to catch up with. For the young people, the young artists, this opened a new door for us to see the West. It was fascinating. I wanted to study it.” Liang’s newfound interest in American art and culture led him to Boston University, where he earned a Master’s Degree in Fine Art. His formal education did much to shape his art, but a chance encounter at a nearby museum arguably equally influenced his career. “Plimoth Plantation basically is a village maintained the same way as in 1620, when the Mayflower landed there,” explains Liang, describing his visit to a popular Massachusetts tourist attraction. “You could see it and go there and meet all these people. Basically, they’re actors; they wear the 1620’s garb. They tell the story of what happened at that time. Right

In the Morning Mist oil, 24˝ by 30˝ “On a quiet morning, two Wampanoag men are preparing for deer hunting.”

next to that plantation there are some Indian homes, a historical Wampanoag homesite, and they’ve become a sort of outdoor museum. It’s the only outdoor Indian museum in this country. Basically, they just recreated an Indian village live—the house, the canoes, the corn and beans, drying the fish that comes from the river. And my inspiration was there.” Liang introduced himself to one of the actors, who agreed to pose for him and went on to teach Liang about many details of Native American life: hunting, fishing, rites and rituals, clothing and armor, history and traditions. Liang’s interest grew, leading him to study other aspects of Native American life through books and other resources, to visit other museums, and to connect with members of other tribes. Soon, he had produced a handful of paintings, which he showed to a gallery. “They were excited,” he says. “They asked me to become their artist.” In the ensuing years, Liang traveled widely, learning about other tribes. Another chance encounter also proved meaningful to him. “On one occasion I went to the Four Corners, and a Navajo tour guide asked me where I came from,” he says. “I said, January/February 2018 • ART of the WEST

‘China,’ and she said, ‘Did you know we originated from China?’ and I had no idea. She said, ‘Our ancestors were originally from China, and then we came here.’” Liang’s voice grows thoughtful, a mix of skepticism and curiosity and something like hope. “This is the only incident where a Native American told me their ancestors originally came from China,” he says. “How can they know it’s China? It’s all oral history—I mean, for the Indians, everything is passed down from the older generations, so I don’t know what exactly this oral history came from, but I was happy to hear her say it.” For Liang, the tour guide’s comments confirmed a near-mystical sense of kinship he’s come to enjoy with the tribes he studies and depicts. “I feel like we are cousins,” he says. As his career has progressed, Liang’s prestige has grown. He’s collected dozens of awards and sold hundreds of paintings. For him, a particularly proud achievement is

Appaloosa for Gun, oil, 44˝ by 64˝ “In 1795, the Hudson Bay Company from Canada had an established trade with the Mandan Indian. The supply of valued trade goods included metal weapons and tools, powder and balls, woolen fabrics, beads, and all manner of glittering extras. Many neighboring tribes came to trade with them. Soon, the Mandan village became one of the major trade posts in the Northern Plains. The Nez Perce Indians were well known for their unique horse breed—the Appaloosa. In 1805, a group of Nez Perce men, with beautiful Appaloosas, traveled through the hostile territory of the Blackfeet to trade with the Mandan. Through this exchange, they obtained their first six guns.”

a book he released in 2014. “Z.S. Liang: Native Trails, Fresh Tracks”, with text written by fellow Western artist Tom Saubert, offers 70 carefully chosen, full-color reproductions of Liang’s paintings. The book offers him the opportunity to not just show his work, but to tell the stories behind it—something he loves to do. “Every single painting, it tells the story about the painting— the story that’s going on, also interviews, how and why I want to do this painting, the technique—the whole art history point of view,” he says. We close our interview, reluctantly. Liang would gladly tell me more about his paintings, and I’d gladly listen, but he has paintings to paint and I have articles to write. “I need to track down that book,” I tell him,

jotting myself a reminder to do so. We say goodbye, and I imagine he resumes his evening with his wife and daughter in their California home. (His other daughter is away at college.) I go to his website, clicking slowly through the rich and colorful images, replaying the stories he’s told me. I’ll revisit those paintings and those stories again, likely finding something new with each viewing, as is the case with every good story. And, like those who collect Liang’s paintings, I’ll look forward to the many stories he has yet to tell.

Clover Neiberg is a writer living in Portland, Oregon.