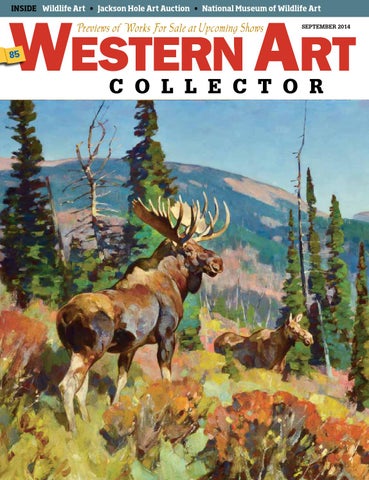 ogan Maxwell Hagege doesn’t paint people. He paints living monuments, their immovable shapes, monoliths of stoic resolve, rising out of the desert’s scorched dust and sage. These figures, half-dipped in the sunset’s radiating oranges and yellows, stand silent and motionless, their squinting eyes lost within the enormity of the stage where they star in Hagege’s painted dioramas. T.E. Lawrence, a man who spent a great deal of time analyzing faces in the desert, wrote, “All men dream, but not equally. Those who dream by night in the dusty recesses of their minds wake up in the day to find it was vanity, but the dreamers of the day are dangerous men, for they may act their dreams with open eyes, to make it possible.” Likewise, Hagege paints men—and women—who have isolated their dreaming to the daytime hours. Their thoughts seem to be written on their faces, yet also elusive and mysterious, a half forgotten whisper carried on the wind. “The people that I meet in the desert are as exciting for me as the landscapes that I see. It was just a natural evolution for me to paint the people who inhabit the desert into the landscapes that I had been painting for years,” he says. “I try not to talk about what the figures are seeing or how they feel in the paintings. I find that the viewer’s personal conversation with

Logan Maxwell Hagege paints the desert and its inhabitants in his stunning new show at Trailside Galleries in Jackson, Wyoming. By Michael Clawson

the painting is a very important thing. I think each piece I paint shows how I feel about the people and the landscapes that I paint, both of which I hold in high regard. If I can show my great respect for my subjects then I feel like I have been successful.” Hagege, at only 34 years old, is a rising star in the art world, where his works are frequently

shown in group shows, exhibited at major events and sold at auction, racking up spectacular numbers for an artist so young that he still can’t meet the age requirement to run for president. “I don’t really think about my age much, or feel that I am in a good place because of my age. I have always worked really hard at attempting to make good paintings, and I feel like that will Mighty Cliffs, oil, 20 x 30&quot;

always be the case for me. I remember when I was in art school, at about the age of 20, the school had a bunch of professional illustrators come in to review our work. One of the people who looked over my portfolio was the head of a big movie studio illustration department. As he was reviewing my work I asked, ‘Do you think it’s too late for me to really get good?’ and he looked at me like I was crazy,” Hagege shares. “But I knew what the Old Masters were doing when they were 20 and they were much further along than I was. So I have always felt like I have been behind because I try to hold my work up to the standards of the greats that have come before us.” Hagege’s work, so delicately honed in style, often bears his popular hallmarks, from his ballooning clouds and splendid choice of colors to his modernist shapes and geometric callbacks to illustration. His works are also recognizable for their figures that could be from Richard Avedon photographs: the faces, absent of emotion, stare out unblinkingly. Avedon put his subjects against white backdrops and let them vacate their emotions before the shutter

clicked and, similarly, Hagege puts his subjects against the blues and oranges of the desert’s horizon and then paints very few emotions on their faces. Their poses are simple and natural. Their gazes are fixed on the horizon, witnesses to the setting sun’s majesty. And although the desert is wide, and the people are so small in it, his figures never lose their stature against the background’s looming immensity. Lawrence said he was “shamed into pettiness by the innumerable silence of the stars,” and Hagege’s figures exist under those same skies. “The desert always carries a sense of adventure and discovery for me. Every time I take a painting trip to the desert I feel so excited to make new discoveries. I will often drive down random dirt roads that I have never seen before and find great new landscapes to paint. I have been fascinated with the desert ever since I was a child,” he says. “We used to go on family trips to visit my grandmother in Palm Springs, California, and the drive through the desert to get there was always fun for me… Other trips, during the early mornings, I would stare out of the window at the endless fields of

The artist signs his piece Planet Earth Turns Slowly in his studio.

Clockwise from top left: A Stranger’s Land, oil, 30 x 20” Planet Earth Turns Slowly, oil, 40 x 60&quot; Small katsinas from the late 1890s and early 1900s sit on a shelf next to several small horse models used for reference. Clouds for Days, oil on linen, 30 x 30&quot; Paintbrushes and paint can be seen on a palette in the artist’s studio.

sage that we sped by in our family car.” An avid collector himself—he owns pieces by Maynard Dixon, Joseph Fleck, and Bert Geer Phillips, as well as work by living artists such as Glenn Dean, Josh Elliott, and Jeremy Lipking— Hagege surrounds himself with art in his Los Angeles home and in his warehouse studio. He freely admits he’s not the fastest painter, but counters that by working on several pieces at once. “My work seems to take its time, and I’m alright with that,” he says. “I enjoy just looking at the pieces trying to determine where to go, or analyzing the painting and just thinking about what needs to be changed.” Some artists look upon struggle as a mandatory

side effect to creativity. An argument can be made that painting’s difficulty is what pushes artists ever forward, but Hagege brushes it aside, saying that painting is too enjoyable to get wrapped up in the existential meaning of struggle. “Painting is mostly pleasant and enjoyable. I have been working on a landscape for several months, and I might not be done for several more months. That’s a long time, but it’s painless. And it’s exciting for me to keep working on it, to get it right,” he says, adding that his approach is what keeps it all fresh. “I don’t work in a formulaic

way, and I don’t use gimmicks and tricks, so sometimes a piece, like this landscape, just takes some time to get right. I definitely don’t think the struggle is an essential part of painting…I just look at each day as a new opportunity to learn and lead me to my next painting.” He continues, “I need to paint. It’s not even a want—it’s a need. It wouldn’t matter if I weren’t in any shows, because if it all ended tomorrow I‘d still do this. It’s not about recognition or money. It’s about spending every day trying to improve as an artist. The physical

act of making a painting…it just feels normal, like I’m in the right place.”