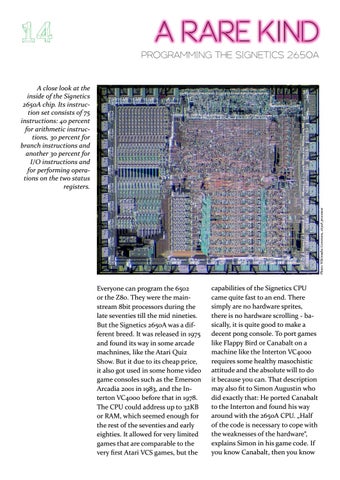 A RARE KIND PROGRAMMING THE SIGNETICS 2650A

Everyone can program the 6502 or the Z80. They were the mainstream 8bit processors during the late seventies till the mid nineties. But the Signetics 2650A was a different breed. It was released in 1975 and found its way in some arcade machnines, like the Atari Quiz Show. But it due to its cheap price, it also got used in some home video game consoles such as the Emerson Arcadia 2001 in 1983, and the Interton VC4000 before that in 1978. The CPU could address up to 32KB or RAM, which seemed enough for the rest of the seventies and early eighties. It allowed for very limited games that are comparable to the very first Atari VCS games, but the

capabilities of the Signetics CPU came quite fast to an end. There simply are no hardware sprites, there is no hardware scrolling - basically, it is quite good to make a decent pong console. To port games like Flappy Bird or Canabalt on a machine like the Interton VC4000 requires some healthy masochistic attitude and the absolute will to do it because you can. That description may also fit to Simon Augustin who did exactly that: He ported Canabalt to the Interton and found his way around with the 2650A CPU. â&amp;#x20AC;&amp;#x17E;Half of the code is necessary to cope with the weaknesses of the hardwareâ&amp;#x20AC;&amp;#x153;, explains Simon in his game code. If you know Canabalt, then you know 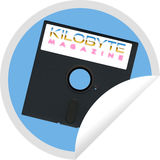