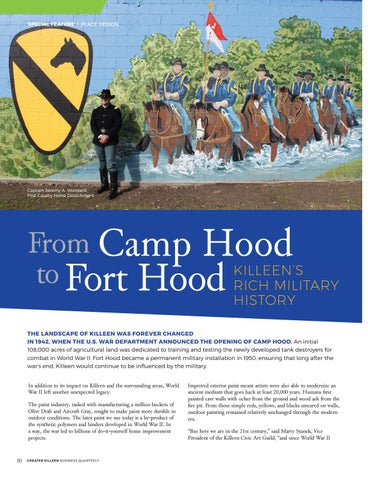 THE LANDSCAPE OF KILLEEN WAS FOREVER CHANGED IN 1942, WHEN THE U.S. WAR DEPARTMENT ANNOUNCED THE OPENING OF CAMP HOOD. An initial 108,000 acres of agricultural land was dedicated to training and testing the newly developed tank destroyers for combat in World War II. Fort Hood became a permanent military installation in 1950, ensuring that long after the war’s end, Killeen would continue to be influenced by the military. In addition to its impact on Killeen and the surrounding areas, World War II left another unexpected legacy. The paint industry, tasked with manufacturing a million buckets of Olive Drab and Aircraft Gray, sought to make paint more durable in outdoor conditions. The latex paint we use today is a by-product of the synthetic polymers and binders developed in World War II. In a way, the war led to billions of do-it-yourself home improvement projects.

Improved exterior paint meant artists were also able to modernize an ancient medium that goes back at least 20,000 years. Humans first painted cave walls with ocher from the ground and wood ash from the fire pit. From those simple reds, yellows, and blacks smeared on walls, outdoor painting remained relatively unchanged through the modern era. “But here we are in the 21st century,” said Marty Stanek, Vice President of the Killeen Civic Art Guild, “and since World War II

The 2017 Fort Hood Guide gives an in-depth look at the largest economic driver in the state of Texas, Fort Hood. This issue features "The Great Place, at a Glance," "Interstate 14 Designation Will Bring Local, State and National Progress" and "From Camp Hood to Fort Hood: Killeen's Rich Military History." 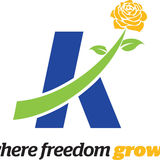