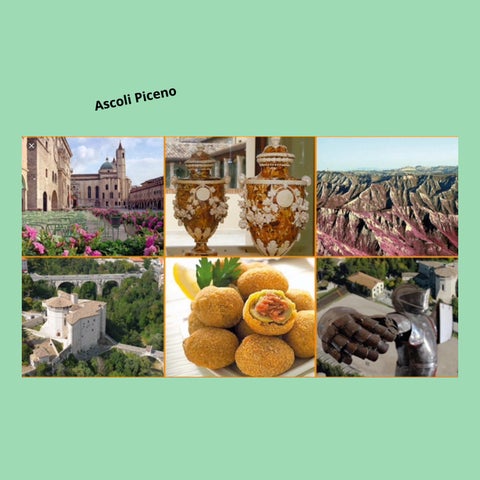 Ascoli Piceno is a town and comune in the Marche region of Italy, capital of the province of the same name. Its population is around 49,500[1] but the urban area of the city has more than 100,000.

History The city was founded by an Italic population (Piceni) several centuries before Rome's founding on the important Via Salaria. In 268 BC it became a "federated" city with nominal independence from Rome. Its inhabitants acquired Roman citizenship, following the developments and the eventual fall of the Roman Republic. During the Middle Ages Ascoli was ravaged by the Ostrogoths and then by the Lombards of King Faroald. After nearly two centuries as part of the Lombard Duchy of Spoleto, Ascoli was ruled by the Franks through their vicars, but ultimately it was the bishops that gained inďŹ&#x201A;uence and power over the city.

Main sights Many of the buildings in the central historical part of the city are built using marble called travertino. Its central Renaissance square, Piazza del Popolo ("Square of the People") is surrounded by a number of buildings utilizing this stone, now often hosting open-air markets. A few blocks away, the Piazza Arringo was the administrative and religious center of the town, surrounded by the Cathedral, the baptistery, the Bishop's residence, and the Palace of the Commune. According to traditional accounts, Ascoli Piceno once housed some two hundred towers in the Middle Ages.