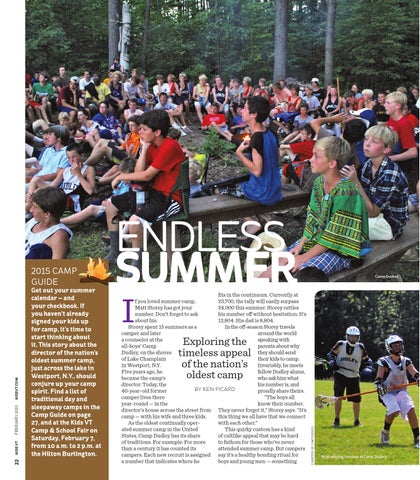 Endless Get out your summer calendar — and your checkbook. If you haven’t already signed your kids up for camp, it’s time to start thinking about it. This story about the director of the nation’s oldest summer camp, just across the lake in Westport, N.Y., should conjure up your camp spirit. Find a list of traditional day and sleepaway camps in the Camp Guide on page 27, and at the Kids VT Camp &amp; School Fair on Saturday, February 7, from 10 a.m. to 2 p.m. at the Hilton Burlington.

fits in the continuum. Currently at 23,700, the tally will easily surpass f you loved summer camp, 24,000 this summer. Storey rattles Matt Storey has got your his number off without hesitation: It’s number. Don’t forget to ask 13,804. His dad is 8,804. about his. In the off-season Storey travels Storey spent 15 summers as a around the world camper and later speaking with a counselor at the parents about why all-boys’ Camp they should send Dudley, on the shores their kids to camp. of Lake Champlain Invariably, he meets in Westport, N.Y. fellow Dudley alums, Five years ago, he who ask him what became the camp’s his number is, and director. Today, the By Ken Picard proudly share theirs. 40-year-old former “The boys all camper lives there know their number. year-round — in the director’s house across the street from They never forget it,” Storey says. “It’s this thing we all have that we connect camp — with his wife and three kids. with each other.” As the oldest continually operThis quirky custom has a kind ated summer camp in the United of cultlike appeal that may be hard States, Camp Dudley has its share to fathom for those who’ve never of traditions. For example: For more attended summer camp. But campers than a century it has counted its campers. Each new recruit is assigned say it’s a healthy bonding ritual for boys and young men — something a number that indicates where he

Exploring the timeless appeal of the nation’s oldest camp

How Parents Can Reignite Their Romance 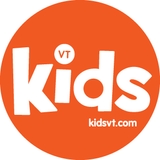