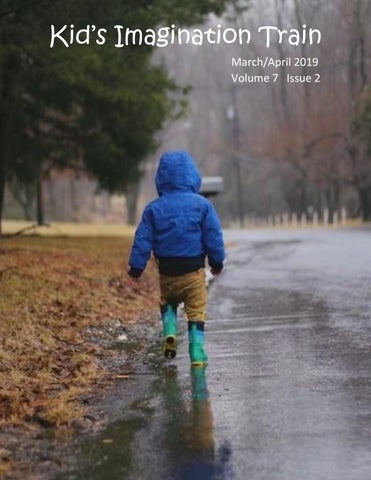 Mission Statement: Welcome to the Kid's Imagination Train, where children can take the journey of reading in a brand-new way. KIT offers book reviews, fiction, poetry, and nonfiction for kids ages 5 - 12. Itâ&#x20AC;&#x2122;s unique in that it engages children by providing them the opportunity to illustrate their favorite features and to have their pictures published online. We invite you to read, to learn, and to draw!

5 - 6…Poem The Pirate, His Treasure, and a Cat Named Mordecai by: Brian Olson

7 - 9…Nonfiction Older than the Dinosaurs by: Patricia Daniele

10…Poem A Letter from Lucas by: Regina Montana

13…Words Around the World by: Randi Lynn Mrvos

My socks are on the wrong feet. It’s difficult to walk! My left foot eases rightly, Which makes my right foot balk. I don’t have time to change socks, I’ve got to get to school; But stepping on my own toes Is really not too cool. I could invent a new dance– Glide-stomp, glide-stomp, glide-stomp. If your socks give you some trouble, Then we’d have ourselves a romp. I almost miss the school bus, (My socks have other plans.) I think I can do better By walking on my hands. 3

But what about my backpack? It’s banging on my head. The driver honks the bus horn. I quickly crawl instead. As I stumble up the steps And lurch into a seat. The bus is filled with giggling And staring at my feet. My best friend moves beside me. He says, “That’s quite an act!” (The driver is not smiling. He’s glowering in fact!) “I’m not clowning,” I insist. “I can’t control the beat. My socks have taken over, ‘Cause they’re on the wrong two feet.” My friend says I am silly, That socks have no left and right. But my socks are well-behaved, And they never ever fight. Perhaps he’s simply gifted At putting on his socks. But he is missing something special. My dance step truly rocks!

The Pirate, His Treasure and a Cat Named Mordecai

Once upon a time, there was A cat named Mordecai. His owner was a pirate with A patch upon his eye. Not a parrot but a cat The pirate liked to keep. Instead of open seas he sailed The highways in his Jeep. His treasure was a box where He kept a rabbitâ&#x20AC;&#x2122;s foot. It warded off bad fortune Up with which he would not put! And so heâ&#x20AC;&#x2122;d sail on down the road, With a patch upon his eye, And on his lap his treasure and A cat named Mordecai. 5

One day he stopped at Pirate’s Cove, A favorite pirate stop, Where hungry pirates order up Their favorite pirate slop. He dug for buried treasure underneath His mashed potatoes, And found a hoard of rubies (which Were really grape tomatoes). He pocketed those rubies, Watching out for any foe, Then ordered for the cat a box Of fish ’n’ chips to go. And so he sailed on down the road, While shouting “Arrr!” and “Aye!” Together with his treasure and A cat named Mordecai. That night he stopped at Pirate’s Park To wish upon a star. He grew a little thoughtful as He climbed back in the car: “I may not sail a pirate ship, Or lug a chest of jewels, But Mordecai the cat and I— We play by our own rules! “I don’t need things, ‘cause in my heart I sing a pirate song, And Mordecai the cat and I Are where we both belong.” And still he sails on down the road, That jolly pirate guy, Forever with his treasure and A cat named Mordecai.

Older Than the Dinosaurs Living at the bottom of the ocean fifty-six hundred feet down, seldom seen, hiding from predators under the cold, murky mud, watching… waiting for prey, soft-skinned, eel-like, but not an eel, pink or brown or black without fins, or scales is the world’s ugliest, nastiest, most disgusting sea creature—the hagfish. Seventy-six species have been discovered around the world. It is ancient, unchanged since dinosaurs roamed the earth 330 million years ago. The hagfish eats dead or dying animals.

But sometimes, they go months without eating. When they sense prey, with four pairs of tentacles in their jawless mouths, a single nostril on their head, and simple eyespots, they attack it by oozing sticky gooey slime from glands all over their bodies that combines with seawater and they latch on, burrow in with tooth-like structures, absorb flesh with their tongues, scrape and eat from the inside out. Afterward, they sneeze, tie themselves into a knot that slides along their bodies, and clean off the slime. Hagfish breed all year long, changing from male to female and back again. Babies hatch from yolky eggs in a horny shell. They are tiny â&#x20AC;&#x201C; two inches long, mini adults with their paddle tails that swim away down, down to the cold, murky mud at the bottom deep, sunless ocean to live on their own where the cycle starts all over again. 8

Fun Facts about Hagfish Hagfish hate change. These primitive creatures, predators and prey, have been balancing the ocean eco-system hunting and scavenging for over 300 million years. Hagfish are food. They are eaten by fish, seabirds, seals, and yes, people. A delicacy in Korea, they are now being farmed in fisheries for commercial use. Hagfish are useful. Their “eel skin” is used to make belts and wallets. Hagfish save lives. Made up of protein threads resembling spider silk, the slime can make fabric ten times stronger than nylon and can be used for bullet-proof vests, protection for firefighters and divers, artificial tissues, anti-shark sprays, and coatings for ships for protection against algae and barnacles. Hagfish are celebrated… The third Wednesday of every October is Hagfish Day!! Activities for Hagfish Day: http://whaletimes.org/wp-content/uploads/2014/10/HagfishDay-enGrossed-in-Slime-or-It-sNot-Funny-Activity-Copyright-WhaleTimes.pdf The author wishes to thank Greg Rouse, Ph.D., Professor, Marine Biology Research Division of Scripps Institution of Oceanography at the University of California San Diego and Curator of the Benthic Invertebrate Collection in La Jolla, California for his expertise. Written by: Patricia Daniele

A Letter from Lucas

When Amy Krouse Rosenthal and Tom Lichtenheld collaborate, magic happens. The good kind of magic, that carries you away into a happy place. Writing as a litany of wishes: More give than take. More will than hill.

More can than knot...and more, and many more. There is wordplay at work here: a Rosenthal trademark. And more.

Illustrations, colorful, sparse, yet drawing out meaning. Look at the illustration for “I wish you more pause than fast-forward.” Perfection. The book is a benediction, and more. It is a poem of gratitude: “I wish all this for you, because you are everything I could wish for….and more.” Perfection. As a reader one could not ask for more.

Words around the World African Animals

Visit this link to listen to the words: https://translate.google.com/

What animal should you invite to a picnic? An anteater What kind of sea creatures wear horse shoes? Horseshoe crabs What is a koala bearâ&#x20AC;&#x2122;s favorite drink? Coca koala What do you call a group of poodles driving to school? A car poodle 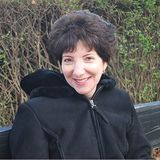