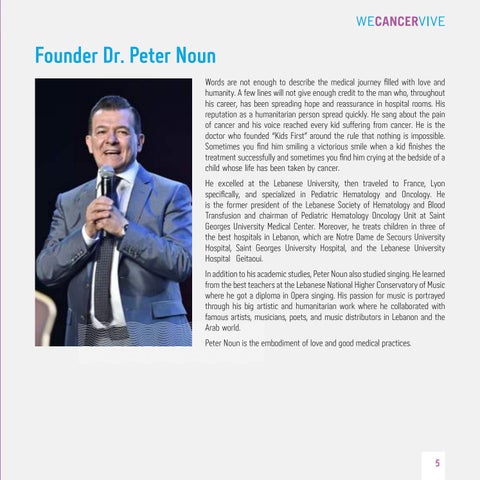 Founder Dr. Peter Noun Words are not enough to describe the medical journey filled with love and humanity. A few lines will not give enough credit to the man who, throughout his career, has been spreading hope and reassurance in hospital rooms. His reputation as a humanitarian person spread quickly. He sang about the pain of cancer and his voice reached every kid suffering from cancer. He is the doctor who founded â&#x20AC;&#x153;Kids Firstâ&#x20AC;? around the rule that nothing is impossible. Sometimes you find him smiling a victorious smile when a kid finishes the treatment successfully and sometimes you find him crying at the bedside of a child whose life has been taken by cancer. He excelled at the Lebanese University, then traveled to France, Lyon specifically, and specialized in Pediatric Hematology and Oncology. He is the former president of the Lebanese Society of Hematology and Blood Transfusion and chairman of Pediatric Hematology Oncology Unit at Saint Georges University Medical Center. Moreover, he treats children in three of the best hospitals in Lebanon, which are Notre Dame de Secours University Hospital, Saint Georges University Hospital, and the Lebanese University Hospital Geitaoui. In addition to his academic studies, Peter Noun also studied singing. He learned from the best teachers at the Lebanese National Higher Conservatory of Music where he got a diploma in Opera singing. His passion for music is portrayed through his big artistic and humanitarian work where he collaborated with famous artists, musicians, poets, and music distributors in Lebanon and the Arab world. Peter Noun is the embodiment of love and good medical practices.