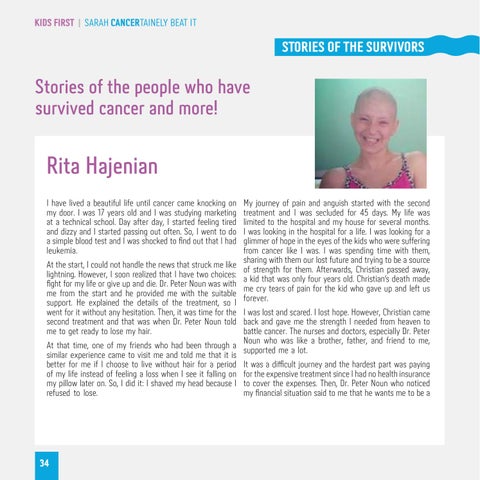 STORIES OF THE SURVIVORS

Stories of the people who have survived cancer and more!

Rita Hajenian I have lived a beautiful life until cancer came knocking on my door. I was 17 years old and I was studying marketing at a technical school. Day after day, I started feeling tired and dizzy and I started passing out often. So, I went to do a simple blood test and I was shocked to find out that I had leukemia.

My journey of pain and anguish started with the second treatment and I was secluded for 45 days. My life was limited to the hospital and my house for several months. I was looking in the hospital for a life. I was looking for a glimmer of hope in the eyes of the kids who were suffering from cancer like I was. I was spending time with them, sharing with them our lost future and trying to be a source of strength for them. Afterwards, Christian passed away, a kid that was only four years old. Christianâ&#x20AC;&#x2122;s death made me cry tears of pain for the kid who gave up and left us forever.

At the start, I could not handle the news that struck me like lightning. However, I soon realized that I have two choices: fight for my life or give up and die. Dr. Peter Noun was with me from the start and he provided me with the suitable support. He explained the details of the treatment, so I went for it without any hesitation. Then, it was time for the I was lost and scared. I lost hope. However, Christian came second treatment and that was when Dr. Peter Noun told back and gave me the strength I needed from heaven to battle cancer. The nurses and doctors, especially Dr. Peter me to get ready to lose my hair. Noun who was like a brother, father, and friend to me, At that time, one of my friends who had been through a supported me a lot. similar experience came to visit me and told me that it is better for me if I choose to live without hair for a period It was a diďŹ&#x192;cult journey and the hardest part was paying of my life instead of feeling a loss when I see it falling on for the expensive treatment since I had no health insurance my pillow later on. So, I did it: I shaved my head because I to cover the expenses. Then, Dr. Peter Noun who noticed my financial situation said to me that he wants me to be a refused to lose.