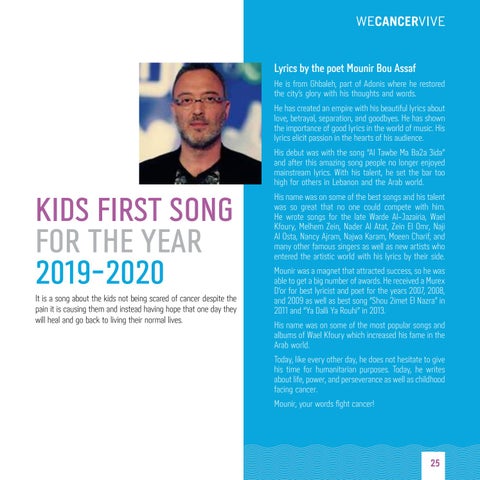 He is from Ghbaleh, part of Adonis where he restored the city’s glory with his thoughts and words. He has created an empire with his beautiful lyrics about love, betrayal, separation, and goodbyes. He has shown the importance of good lyrics in the world of music. His lyrics elicit passion in the hearts of his audience.

It is a song about the kids not being scared of cancer despite the pain it is causing them and instead having hope that one day they will heal and go back to living their normal lives.

His debut was with the song “Al Tawbe Ma Ba2a 3ida” and after this amazing song people no longer enjoyed mainstream lyrics. With his talent, he set the bar too high for others in Lebanon and the Arab world. His name was on some of the best songs and his talent was so great that no one could compete with him. He wrote songs for the late Warde Al-Jazairia, Wael Kfoury, Melhem Zein, Nader Al Atat, Zein El Omr, Naji Al Osta, Nancy Ajram, Najwa Karam, Moeen Charif, and many other famous singers as well as new artists who entered the artistic world with his lyrics by their side. Mounir was a magnet that attracted success, so he was able to get a big number of awards. He received a Murex D’or for best lyricist and poet for the years 2007, 2008, and 2009 as well as best song “Shou 2imet El Nazra” in 2011 and “Ya Dalli Ya Rouhi” in 2013. His name was on some of the most popular songs and albums of Wael Kfoury which increased his fame in the Arab world. Today, like every other day, he does not hesitate to give his time for humanitarian purposes. Today, he writes about life, power, and perseverance as well as childhood facing cancer. Mounir, your words fight cancer!