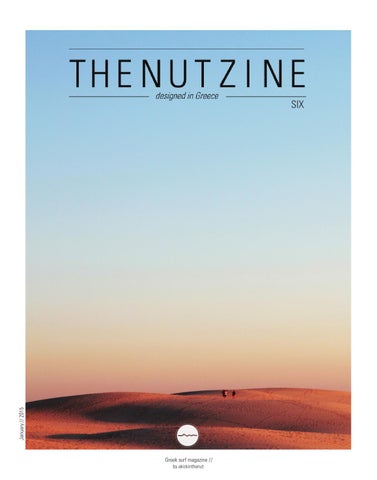 HELLO Number SIX... So long summer, welcome winter! Hot bikinis, beaches, boardshorts and coctails are done! Back on rainy, cold, windless, glassy, high quality waves!! We are definitely going to miss summer and all that vibe in Greek islands; that’s why nutzine is here, to remind you a bit about ISLAND ESCAPES! You asked for high quality surfing and that’s why we travelled to Portugal, meeting Albee Layer, Matt Meola and Torrey Meister while they were filming for their new movie ATTRACTIVE DISTRUCTIONS by TakeShelterProductions. It was a blast and a good experience for sure! Have you ever heard of the magic number 3? It’s the best number...it fits everywhere, even on a small car with lots of sticks...! Our hotties are here! Morocco and its lefts (yes, leftieees in Morocco) are also inside... No more words! Enjoy issue SIX and have an adventurous winter...

I was wishing for the time to stop.

15 You are trapped at the office for some weeks now and you feel like shit, while all this time you are checking the forecast and everything is flat... and suddenly you see “ light at the end of the tunel”!!! North winds are finally ON!! Quick and accelerated procedures; calling the buddies, booking the tickets for the ships, asking your boss for a day off, they say YES, and that’s it... going home, packing and waiting for the departure date to come... Tinos and Ikaria islands are the destinations of a quick 3day #nut_escape! It’s up to you to choose one or the other! Tinos is 3,5 hours from Athens by ship and is in the middle of the Aegean Pelagus while Ikaria is 6-7 hours towards the east. These are the first islands where North winds (a.k.a Meltemi) meet and the windswell will break first! Most of the times, during summer, you surf in your boardshorts!Yeees! If you want to be realistic, you will say that the surf is not something crazy, most of the times, because it is windy, choppy, not very shallow and the period is around 5-7 seconds. BUT THE VIBE MAKES YOU TO FORGET ALL THESE IMPERFECTIONS. On the other hand, the waves have a descent long ride in Tinos with a perfect lift for the “BIG” days or the lazy guys!! :) Ikaria has some nice vertical sections on the outer bank to try your luck! The best plan is to combine surfing with the beautiful architecture of the islands, the nice villages all around the land and to taste the local food which is sooo good and cheap! As for the PARTY ANIMALS, Mykonos is 30’ from Tinos and the middle stop for Ikaria,with the ferry... just saying...!

very time, before a surf trip, I am wondering whether I checked the swell correctly, if I chose the right dates, or the right quiver?

When I am there, at a spot, I tend to go mental, thinking whether I should go out, is there a better place, is the tide right, did I wake up early enough, why is there nobody out?

I stayed for a bit more than a week. I went all the way from North Portugal to the lowest point of the South; Woke up early and late, listened to great tunes and really bad ones, surfed perfect waves and crappy ones, scored south when it was supposed to be good north and spent a day eating crisps when it was supposed to be pumping. Apparently somewhere else they were getting cover ups.

mean, a good spot in the case of the pros can be a phone call away but again who can guarantee that it’s the right choice, that you’ll have the correct quiver, that you won’t wake up just a bit later to miss it or even surf it too early only to see photos later on with the same spot pumping when you were deep in your second breakfast.

A surf trip is an adventure. The more you take, your experience will improve how much you score and your surfing will gradually change your perspective on the breaks. A shitty wave now could be a perfect one 2 years later. Take your favorite board, wear your biggest smile, leave the mobile behind, chill out and enjoy the trip. You might score and you might not. Even the pros don’t score in every trip.

k, we’ve all discussed all this like a million times. Either when it’s time to decide what to eat, who’s to drive, where to go, how to sleep in the car, 3 is the magic number for the crew. I mean, according to history, number 3 has always been a special, magic even holly number, but there is no need to reinvent the wheel; and then it could go up to 6 or 9, but I haven’t tried that yet. My budget can only get me as far as an opel astra for now, but when I’m ready for a minibus I’ll let you know about 9 as well.

What I am trying to say here is that 3 just feels good or actually it feels right!

Maybe you better hold your thoughts mate, swallow the burger and next time he might be up for a pizza or something.

Let’s say there are two of you and have a choice of either a right slab or an ok but a bit crowded beach break. Oh did I mention that the one is a regular and the other’s a goofy footer? Or let’s say you surfed well that messy, ok crowded, beach break and got a couple, but now it’s time to fill your bellies. What do you mean you don’t want to eat burger again? F@ck off. Or let’s take it back, before all the action, while packing, when your mate announced that he is taking two boards on the 3- board boardbag you’re carrying. He is not serious, right?

But when there are 3, no need to hold your thoughts, no need to think before you speak. You have an ally who will support you at all times and if he doesn’t then it means that you got it wrong this time because it’s 2 versus 1, unless you are “The Pioneer”, the guy who thinks not just out of the box but out of this circular universe...But is your name Kepa Accero or Syrus Sutton...yea mate, you were wrong. Maybe you were tired or just lazy. It’s all good. Tomorrow is a new day and you’ll probably be doing exactly what you should. Having a blast on your well planned surf trip along with your best and worst friends in the world.

Are you really going to argue on that surf trip, the one you’ve been planning carefully all this time while hiding from your boss and your misses?

If all the above don’t convince you, splitting the bills 3way will. Safe travels.

When you hear about surfing in Morocco,you think about endless right waves... You are right, but there are also some left waves that are more descent than you can imagine... As you can see in the next few pages, Morocco is a surf paradise for both right and left handers... 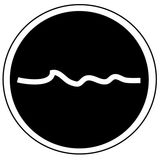