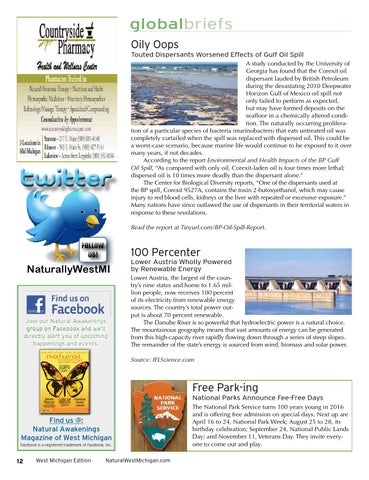 globalbriefs Oily Oops Touted Dispersants Worsened Effects of Gulf Oil Spill A study conducted by the University of Georgia has found that the Corexit oil dispersant lauded by British Petroleum during the devastating 2010 Deepwater Horizon Gulf of Mexico oil spill not only failed to perform as expected, but may have formed deposits on the seafloor in a chemically altered condition. The naturally occurring proliferation of a particular species of bacteria (marinobacters) that eats untreated oil was completely curtailed when the spill was replaced with dispersed oil. This could be a worst-case scenario, because marine life would continue to be exposed to it over many years, if not decades. According to the report Environmental and Health Impacts of the BP Gulf Oil Spill, “As compared with only oil, Corexit-laden oil is four times more lethal; dispersed oil is 10 times more deadly than the dispersant alone.” The Center for Biological Diversity reports, “One of the dispersants used at the BP spill, Corexit 9527A, contains the toxin 2-butoxyethanol, which may cause injury to red blood cells, kidneys or the liver with repeated or excessive exposure.” Many nations have since outlawed the use of dispersants in their territorial waters in response to these revelations. Read the report at Tinyurl.com/BP-Oil-Spill-Report.

Join our Natural Awakenings group on Facebook and we’ll directly alert you of upcoming happenings and events.

Lower Austria Wholly Powered by Renewable Energy Lower Austria, the largest of the country’s nine states and home to 1.65 million people, now receives 100 percent of its electricity from renewable energy sources. The country’s total power output is about 70 percent renewable. The Danube River is so powerful that hydroelectric power is a natural choice. The mountainous geography means that vast amounts of energy can be generated from this high-capacity river rapidly flowing down through a series of steep slopes. The remainder of the state’s energy is sourced from wind, biomass and solar power. Source: IFLScience.com

The National Park Service turns 100 years young in 2016 and is offering free admission on special days. Next up are April 16 to 24, National Park Week; August 25 to 28, its birthday celebration; September 24, National Public Lands Day; and November 11, Veterans Day. They invite everyone to come out and play.