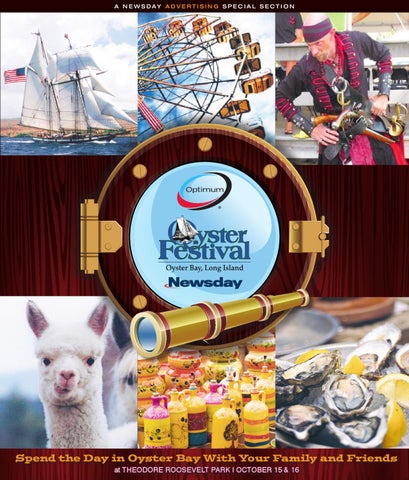 at Theodore Roosevelt Park OCTOBER 15 & 16 In its 28th Year AMONG THE LARGEST WATERFRONT FAMILY FESTIVALS ON THE EAST COAST! Supporting Over 25 Local Charities Grab your kids, family and friends and head to Oyster Bay by train, by boat or car for the 28th Annual Oyster Festival. It’s THE place to be THIS WEEKEND for incredible eats, fantastic musical performances and beautiful handmade products. See the majestic tall ships and the renowned John J. Harvey 9/11 fireboat. Thrill at pirate hijinks. And get ready for the best OYSTERS ever! The festival is organized by the Oyster Bay Rotary Club and members of the Oyster Bay Charitable Fund. The profits from food sales support over 25 local charities while proceeds from the rides and merchandise sales will be donated to charities the Rotary supports throughout the year. Admission is FREE. Parking is FREE. And MOST of the activities are FREE. Oyster Bay Welcomes You!

Take a Walk Down Memory Lane While visiting the quaint, historic hamlet of Oyster Bay, take time to stop and experience some of this community’s history. One hundred and fifty three years ago, Theodore Roosevelt, who would become a national hero as well as the 26th

President of the United States, was born to a wealthy family that summered in Oyster Bay. They lived not far from the waterfront park that nowadays bears his name. To honor his memory, community leaders organized a parade to celebrate what would have been T.R.’s 125th birthday. The parade proved so successful that it provided the roots of what would become the Oyster Festival. Today the Oyster Festival is a much awaited annual event that often attracts over 200,000 visitors from across the northeast. Its success is due to the dedication of members of the Oyster Bay Rotary, who work on the event year-round, and to the members of the Long Island business community that continue to sponsor the event. The 2011 event is made possible in part by OPTIMUM, our title sponsor, and the presenting sponsors, NEWSDAY and NEWSDAY.COM. Jeff Clark, director of government affairs at Cablevision, said, “This is our own town. In 1973 Charles Dolan opened Cablevision here. We are in Bethpage now. I’ve worked with Cablevision for over 20 years and remember being at the Cablevision booth at the festival years ago. We’re proud to be here again and look forward to a great festival.” The Tom Reardon Memorial Food Court sponsored by Bethpage Federal Credit Union With over 60 food choices there is literally something to please every member of your family. Oysters take center stage -- of course! -- and are available on the half-shell, fried or in stew. The oysters are all generously donated by Frank M. Flower. Other delectable seafood choices include a full lobster dinner, mussels au vin blanc, soft-shell crabs, lobster rolls, crab rolls and much more. For land lovers there are many culinary options as well, including chicken wings in 31 different varieties, pulled pork sandwiches, sausage and peppers, steak sandwiches, Texas chili and other traditional festival fare. Each year festival attendees discover that the Food Court

is not just the heart of the festival, it is the soul. It is an incredible means of raising funds for the 25-plus local charities that participate. The food booths are staffed with charity employees and volunteers as well as members of the restaurant or catering company they partner with. “Our sports programs will be the major beneficiary of the money raised during the Oyster Festival,” says Kevin J. McLaughlin of the Saint Dominic C.Y.O. “The funds raised give us a chance to offset the fees charged to parents and to keep those fees for various sports programs that we offer reasonable and lower than other organizations.” Don’t forget to visit the WHOLE FOODS MARKET tent to cast your vote for the BEST OF THE FOOD COURT contest! Voting is easy. VISIT your favorite food vendor, PICK UP an entry blank, and after FILLING IT OUT, DEPOSIT it at the WHOLE FOODS tent. ATMs: For your convenience, the festival is serviced by four ATMs provided by BETHPAGE FEDERAL CREDIT UNION.

your chance to win an Audi A4 three-year lease or $15,000 in cash, courtesy of ANCHOR AUDI OF LYNBROOK, the official car dealership of The Oyster Festival. TRANSPORTATION: Visit by Train, by Car or Boat

Over 200,000 people are expected to attend the festival during the weekend. Please consider taking the FREE shuttle buses to the festival or taking the LIRR. The train stop is conveniently located at the entrance to the festival. Please be sure to visit the CAPITAL ONE WELCOME TENT when you arrive. Limited handicapped parking will be available and handicapped shuttle buses are available. ALCOHOL-FREE and PET-FREE EVENT INFORMATION HOTLINE: 1-516-628-1625

3:15 – 3:45 Charlie Dane At only 13 years old, Oyster Bay native Charlie Dane is an accomplished singer and guitar player with over eight years of training. www.charliedane.net

One COupOn per persOn. GOOd Any dAy. CAnnOT Be COMBIned WITH Any OTHer dIsCOunTS.

Noon – 1:00 Island Xtreme AllStars Cheerleading Team Island Xtreme is an All-Star Competition Cheerleading Team located in Plainview. They have ranked nationally, and one team attended the World Cheerleading Championship in Orlando this past May where they ranked higher than any other New York team. 2:00 – 3:00 Annual Oyster Eating & Shucking Contest 3:00-5:00 Jungle Bob Jungle Bob has influenced many a youngster and opened their eyes to the wonders of the “unloved” natural world of tarantulas, scorpions and snakes.

4:00 – 6:00 The Electrix The Electrix is recognized as one of the leading jam bands currently performing classic rock of the Grateful Dead and Allman Brothers. www.theelectrix.com THE WEST END STAGE SCHEDULE

The 28th Annual Oyster Festival is a project of The Oyster Bay Rotary. What would it take to change the world? Rotary’s 1.2 million members believe it starts with a commitment to Service Above Self.

2:30 – 3:15 Pearl Street Band “Pearl Street” is made up of two former Long Island bands from Oyster Bay -- “Pearly” and “South Street.” The marriage of these bands creates a unique blend of many genres of music. www.pearlstreetband.com

Come to Oyster Bay Via Road, Rail Or Boat! Upon arrival or departure visit our NEW WELCOME TENT sponsored by CAPITAL ONE BANK, to receive a FREE bottle of water (while supplies last) and have your photo taken … as a Visigoth! You’ll leave the tent with a FREE souvenir photo. BY RAIL: The LONG ISLAND RAIL ROAD (LIRR) is proud to annually serve as a major Oyster Festival sponsor. Long Island Rail Road train service takes you right into the festival: NEW - EXPANDED SERVICE FROM THE PORT JEFFERSON AND OYSTER BAY BRANCHES Oyster Bay Branch • Eastbound service (goes to the festival). See the MTA Special Schedule for the Oyster Bay Line October 15 and 16. • Westbound service (returning from the festival) is available with departures approximately every hour. Port Jefferson Branch • Passengers on the Port Jefferson line can take the LIRR to the Syosset station to transfer to FREE shuttle buses - sponsored by COLD SPRING HILLS CENTER FOR NURSING AND REHABILITATION - to the festival.

Check the LIRR schedule for specific departure times from your station. • Eastbound service (returning from the festival) from the Syosset station is available with departures throughout the day. • For details on specific train times at all Oyster Bay & Port Jefferson stations, consult the Special Oyster Bay Branch timetable and the Weekend Port Jefferson timetable, go online to www.mta.info/lirr or phone 1-718-217-LIRR. BY CAR: Take Advantage of FREE Parking and FREE Shuttle Bus Service. Parking in the village of Oyster Bay is limited. Park in officially designated parking lots for FREE shuttle bus service right into the heart of the festival. From the Long Island Expressway: • Take the Long Island Expressway to Exit 41 North, Route 106N (toward Oyster Bay). Proceed north on Rte. 106, cross 25A and continue toward the village. Signs will direct visitors to parking areas for access to the

FREE shuttle bus service to the waterfront. From the North Shore: • Take the Northern State Parkway to Exit 35, Route 106N. Follow directions above to the village. From the South Shore: • Take Sunrise Highway to Rte. 135N (Seaford-Oyster Bay Expressway). Exit at end of ramp to Rte. 25 in Woodbury and continue heading west on Rte. 25 until you reach Jackson Ave. Approximately one mile. Turn right (North) on Jackson Ave. and proceed to Syosset Railroad sta- tion. Park for FREE and take the FREE shuttle bus to the festival. Or you may continue north to Berry Hill Rd. (make a left turn) and take that down into Oyster Bay. Limited parking is available in downtown Oyster Bay. Festival organizers suggest using any of the five FREE satellite parking lots with FREE shuttle bus service into the festival. These locations are listed below. Shuttle buses run from 11 a.m. to 6:45 p.m. Saturday and Sunday. FREE PARKING AND FREE SHUTTLE BUS SERVICE Compliments of COLD SPRING HILLS CENTER FOR NURSING AND REHABILITATION AVAILABLE FROM:

1:15 – 2:00 Todd Mihan and Downside Joyride Todd Mihan and Downside Joyride is a Country Rock band from upstate New York. Their sound has been compared to Bon Jovi and Kid Rock. www.toddmihan.com 2:15 – 3:30 The Legendary Murphys The Legendary Murphys (formerly the Legendary Hooligans) Classic Rock band plays the greatest and lesser-known hits of the legends we have all loved for years, as well as newer hit songs. www.legendaryhooligans.com 4:00 – 5:30 New Dawn New Dawn, formerly known as Signify, is a band made up of Long Island’s most innovative musicians. www.newdawn-music.com

Each year thousands of people rush to the Oyster Festival to see the Tall Ships. This year the American Privateer LYNX will be at the festival. Be sure to climb on board this classroom on the sea. The LYNX was designed and built to replicate a naval schooner from the War of 1812, and its crew members wear period uniforms. Cost: FREE Location: West End Waterfront Pier In honor of the 10th anniversary of 9/11, the John J. Harvey Fireboat will be docked in Oyster Bay. On Sept. 11, 2001, the boat’s owners asked FDNY officials

for permission to assist in evacuations from Ground Zero. Meanwhile, due to many damaged water mains, fire crews were deprived of water. Officials radioed the Harvey to drop off her passengers as soon as possible and return to the disaster site to pump water, reactivating her official designation, Marine 2. Alongside FDNY fireboats Firefighter and John D. McKean, she pumped water for 80 hours, until water mains were restored. Cost: FREE Location: West End Waterfront Pier

Come on board and tour the U.S. Coast Guard Cutter Bollard. Commissioned in February 1967, she currently operates throughout Long Island Sound and north to Narragansett Bay. At 65 feet long and able to break up ice as thick as 12 inches, the Cutter Bollard is necessary in the winter as waterways can freeze and become impassable for maritime commerce. Cost: FREE Location: West End Waterfront Pier

The Christeen, a 40-foot gaff-rigged sloop, is the oldest oyster sloop in America and a National Historic Landmark. She was originally built in 1883 to harvest oysters in Oyster Bay and Cold Spring Harbor. After surviving 16 major hurricanes, numerous Nor’easters, two sinkings and severe neglect, the Christeen was returned home to Oyster Bay in 1992. She was completely restored and launched in 1999. Cost: $20/FREE children under 12 with paying adult Location: Western Waterfront Pier

Life Well Lived At Oyster Bay Manor, we provide gracious assisted living at affordable prices with a comprehensive care program. Enjoy the life ahead of you surrounded by a caring community. Join in activities, find a friend around every corner and celebrate each day. At Harbor House, we specialize in people with Alzheimerâ&#x20AC;&#x2122;s, dementia and memory impairment and realize that they require individualized care in a compassionate and therapeutic environment. Our all-inclusive assisted living programs provide residents with a variety of recreational activities, comprehensive medical care and all the love and respect they would receive at home.

LICENSED BY THE NYS DEPT. OF HEALTH. ELIGIBLE FOR MOST LONG-TERM CARE INSURANCE.