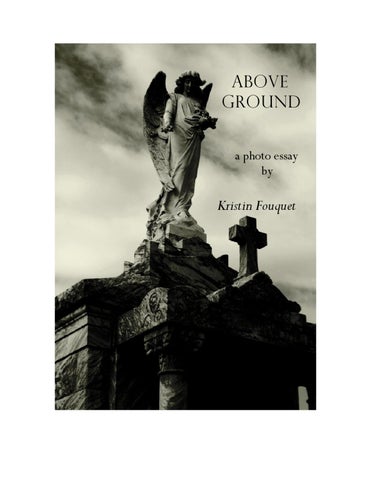 Above Ground a photo essay by

“Above Ground” was first published in Pulp Metal Magazine. (http://pulpmetalmagazine.wordpress.com/2010/06/29/non-fiction-archives22/#more-94)

The term â&amp;#x20AC;&amp;#x153;six feet underâ&amp;#x20AC;? has no meaning for the dead in New Orleans. Early settlers discovered coffins and caskets would unearth from graves due to a high water table and sometimes float away during heavy rainfalls. The Spanish custom of interring the deceased in wall vaults was adopted. Families of means soon commissioned their own tombs.

Some families combined their funds for bigger tombs.

Most cemeteries were comprised of perfect rows and many with functional streets. Tombs resembled small houses and buildings. Lawn crypts were constructed. Some graves were trimmed with wrought iron fences. An old racetrack became the land for Metairie Cemetery. â&amp;#x20AC;&amp;#x153;Cities of the Deadâ&amp;#x20AC;? became a popular sobriquet for New Orleans cemeteries.

Coping graves, also known as lawn crypts or turf-top crypts, are uncovered empty chambers framed then covered with soil and sod. These can be built up to three feet from the ground, granting an earthen burial, a requirement for some religious customs as in Judaism. They also provide rapid availability for recurring internments.

Repeated burial in the same space is called reuse. A vault in a tomb may be reused following another in one year and one day if a wood casket was chosen. Ten years and one day must pass if the last inhabitant was put in a metal casket. The remains are transferred into a burial bag and placed into what is termed the receptacle or the back of the tomb. The casket is destroyed and the vault is prepared for the next occupant.

Angels are popular Christian funerary imagery, second only to the cross. These â&amp;#x20AC;&amp;#x153;messengers of godâ&amp;#x20AC;? are believed to lead the deceased to the afterlife.

The final resting place may also be seen as a reflection of social status. When a famous brothel madam of Storyville, Josie Arlington, spent a small fortune to have her tomb erected in Metairie Cemetery, it caused a scandal among those of prominent social standing. After she was entombed there in 1914, it quickly became a tourist attraction. This horrified the Arlington family, so they had her remains transferred to an anonymous vault elsewhere in the same cemetery, then sold her tomb. The Morales family took ownership. The brass sculpture of a young woman carrying roses stayed behind. Some believe she represents Josie being turned away from her fatherâ&amp;#x20AC;&amp;#x2122;s home. Others assert she is a symbol of a virginal girl seeking employment, but not permitted into the house of ill-repute. Arlington claimed no girlâ&amp;#x20AC;&amp;#x2122;s innocence was ever taken away due to her establishment. Despite the legend, the more likely explanation would be that it is a copy of a sculpture Josie admired.

While pragmatism may have been the initial incentive in burying our dead above ground, aestheticism and personal or familial pride has elevated the practical and enriched the unique architecture in the â&amp;#x20AC;&amp;#x153;Cities of the Deadâ&amp;#x20AC;? that are the cemeteries of New Orleans.

Kristin Fouquet worked as the weekend internment coordinator for Metairie Cemetery and Lake Lawn Park Cemetery and Mausoleum while she attended weekday classes at Delgado Community College to earn her associate of science degree in Funeral Services Education. It was her fondest achievement there to discover the final resting place of Josie Arlington while researching old cemetery records in the vault.

A photo essay about the burial customs and cemeteries of New Orleans. 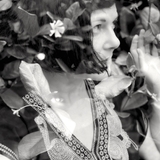