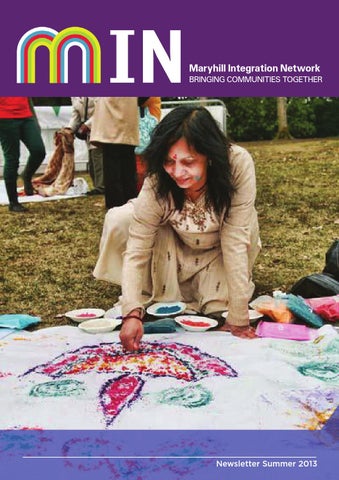 Welcome to our Twenty-ﬁrst Newsletter Welcome to the 22nd edition of Maryhill Integration Network’s Newsletter. There have been many exciting updates over the past few months, and we are happy to share them with you. Highlights include; Holi Indian Festival of Colour in Rouken Glen Park, the opening of the Community Garden for Refugee Week 2013, our Music and Theatre Production Project’s performances at Go Dance ’13 and the launch of the Queen’s Baton Relay as part of the Glasgow Commonwealth Games Celebrations, the national premieres of the extremely popular and influential documentary films made by members of mIN as part of Refugee Survival Trust’s Making it Home Project, all of this as well as three members of MIN receiving major awards and being honoured for their service at mIN, alongside 9 of our service users successfully completing ‘Life in the UK: Citizenship Course’ with Langside College. We hope you enjoy this Newsletter.

that a good friend of mIN and member of

away in November 2012 following a heart

passed away. She was the coordinator of the

International Women’s Group in the North

from Kuwait, although he had many health

of Glasgow and collaborated with mIN to

problems he was a dedicated member of mIN.

celebrate the cultural richness of Glasgow.

A memorial has been placed in the garden to

Originally from Palestine, Lamees will be

greatly missed by all that knew her.

Awards at mIN Our very own Remzije Sherifi, Development Co-ordinator for mIN, was a joint winner of the 2013 Migrant & Refugee Woman of the Year. On Friday 8 March in London, she was recognised for her ability to establish so many activities and projects in Glasgow and beyond, bringing ethnic minority women, asylum-seekers, refugee, and migrants together with local communities. Samira Ahmed introduced the Keynote Speaker. It was a night of inspiration and celebration that showcased all the progress that can be made by women being active in their local and national communities. Janet Andrews, Member of mIN’s Executive Committee

Summer Events Community Garden Party With the official arrival of summer, we were very excited to have the official opening of the Community Garden. Glasgow’s Lord Provost, Sadie Docherty, cut the ribbon to open the garden and planted the first seed. The garden will be a shared community space that will also serve as a venue for running workshops and promoting environmental awareness, well being, and sustainable living. Both the mIN Men’s Group and Oasis Women’s groups have been pitching in to make the garden truly beautiful. The Garden Party was held on as part of Refugee Week 2013 and included face painting, arts and crafts, international dance and music, and gardening activities.

awareness for both the women involved and the audiences. The final films, ‘Come Home’, ‘Choice’, ‘The Shortest Sweetest of Songs’ and ‘It Could Happen’ were screened at 8 events as part of Refugee Week, and were completely sold out in Glasgow and Edinburgh, as well as being presented in Scottish Parliament. The films will also be screened as part of many other documentary film festivals and events in the coming months. You can view the films via the following link: www.makingithome.net

mIN’s Writers with Futures Creative Writing Group has completed an exciting new filmmaking project with Refugee Survival Trust, Glasgow Media Co-op and Edinburgh’s Women Supporting Women Project in Pilton. The project gave both groups the opportunity to build bridges through responding to poetry and creating short films inspired by famous poems on the theme of ‘Home’. The transformation of experience into art has brought personal reflections about hope and

In April, mIN hosted a celebration of Holi, Indian Festival of Colour, with a yoga demonstration, dance workshop, live music, and a colour fight. On a rare sunny day in Rouken Glen Park, participants painted each other in the colours of Spring. Holi is a Hindu holiday celebrating the triumph of good over evil, and was a wonderful way to celebrate the arrival of Spring in Glasgow with funding from Forestry Commission Scotland and support from East Renfrewshire Council.

Just as the Welfare Fund was looking low, a good fairy, Michelle Gallagher, volunteered to run a fund-raising event for us! On Saturday 27th April, Ruchill Kelvinside Parish Church hosted local people and mIN members who enjoyed adult and children’s tombola, arts and crafts, jewelry, henna painting, and lots of wonderful home baking. Patricia Ferguson MSP and Martin Rhodes, the Councilor for Maryhill/Kelvin were also in attendance. Thanks to Michelle, her friends and family, who helped so much; the staﬀ and volunteers who worked so hard; and thanks to Ann McKechin MP, Sandra White MP and to all the other kind people who donated raﬄe prizes. Because of you, the Welfare Fund received an additional £903!

Oasis Women’s Group and Men’s Group Men’s Group mIN Men’s group meets every Tuesday 5.30-7.30pm in Maryhill Community Centre, and provides a space for members of the community to meet, make friends, and take part in activities. Recently, the group has been involved in bike maintenance workshops, taken part in the Wyndford World Cup Football Tournament, hosted a White Ribbon Campaign Session, and contributed to the Community Garden project by building planters and raised beds with support from Glasgow Wood Recycling and Boomerang. New members are welcome!

Oasis Women’s Group mIN’s International Women’s Group took part in a project looking at medicinal plants for health and well-being from the Scottish countryside with Medical Herbalist Catriona Stewart PhD MSc MNIMH. The project was funded by Forestry Commission Scotland and NHS Health Improvement and involved the women making trips to Chatelherault and Mugdock Park to develop knowledge and skills that they will transfer to mIN’s own Community Garden. In partnership with Glasgow Women’s Library, the Oasis Group also took part in a film screening and discussion as part of GWL’s new project ‘Mixing the Colours: Women speaking about sectarianism’. A lively debate followed the screening of Lebanese film ‘Where Do We Go Now?’ directed by Nadine Nabaki, highly recommended by the Oasis members!

Photo Gallery Here is a selection of photographs illustrating mIN activities since the last newsletter.

African Drumming at the Garden Party

Children joining the magician during the Children’s New Year Party

mIN and AlbScott at Go Dance ‘13

ACTION Making Films as part of ‘Making it Home’

Photographs by Karen Gordon, Iman Nezamian, Francesca Morrison, Rosanne Davidson and others. You can see more pictures of mIN at our flickr site: www.flickr.com/photos/ maryhillandcentralwestintegrationnetworks/ 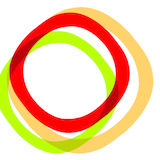