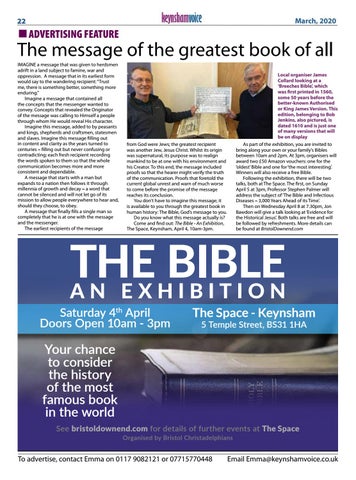 The message of the greatest book of all IMAGINE a message that was given to herdsmen adrift in a land subject to famine, war and oppression. A message that in its earliest form would say to the wandering recipient: “Trust me, there is something better, something more enduring.” Imagine a message that contained all the concepts that the messenger wanted to convey. Concepts that revealed the Originator of the message was calling to Himself a people through whom He would reveal His character. Imagine this message, added to by peasants and kings, shepherds and craftsmen, statesmen and slaves. Imagine this message filling out in content and clarity as the years turned to centuries – filling out but never confusing or contradicting; each fresh recipient recording the words spoken to them so that the whole communication becomes more and more consistent and dependable. A message that starts with a man but expands to a nation then follows it through millennia of growth and decay – a word that cannot be silenced and will not let go of its mission to allow people everywhere to hear and, should they choose, to obey. A message that finally fills a single man so completely that he is at one with the message and the messenger. The earliest recipients of the message

Local organiser James Collard looking at a ‘Breeches Bible’, which was first printed in 1560, some 50 years before the better-known Authorised or King James Version. This edition, belonging to Bob Jenkins, also pictured, is dated 1610 and is just one of many versions that will be on display As part of the exhibition, you are invited to bring along your own or your family’s Bibles between 10am and 2pm. At 3pm, organisers will award two £50 Amazon vouchers: one for the ‘oldest’ Bible and one for ‘the most interesting’. Winners will also receive a free Bible. Following the exhibition, there will be two talks, both at The Space. The first, on Sunday April 5 at 3pm, Professor Stephen Palmer will address the subject of ‘The Bible and Infectious Diseases – 3,000 Years Ahead of its Time’. Then on Wednesday April 8 at 7.30pm, Jon Bawdon will give a talk looking at ‘Evidence for the Historical Jesus’. Both talks are free and will be followed by refreshments. More details can be found at BristolDownend.com

from God were Jews; the greatest recipient was another Jew, Jesus Christ. Whilst its origin was supernatural, its purpose was to realign mankind to be at one with his environment and his Creator. To this end, the message included proofs so that the hearer might verify the truth of the communication. Proofs that foretold the current global unrest and warn of much worse to come before the promise of the message reaches its conclusion. You don’t have to imagine this message; it is available to you through the greatest book in human history: The Bible, God’s message to you. Do you know what this message actually is? Come and find out: The Bible - An Exhibition, The Space, Keynsham, April 4, 10am-3pm.

THE BIBLE AN EXHIBITION

Your chance to consider the history of the most famous book in the world See bristoldownend.com for details of further events at The Space Organised by Bristol Christadelphians News, events and services for the communities of Keynsham, Saltford and surrounding villages

News, events and services for the communities of Keynsham, Saltford and surrounding villages