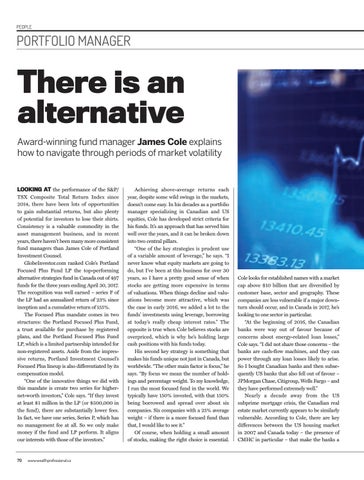 LOOKING AT the performance of the S&amp;P/ TSX Composite Total Return Index since 2014, there have been lots of opportunities to gain substantial returns, but also plenty of potential for investors to lose their shirts. Consistency is a valuable commodity in the asset management business, and in recent years, there haven’t been many more consistent fund managers than James Cole of Portland Investment Counsel. GlobeInvestor.com ranked Cole’s Portland Focused Plus Fund LP the top-performing alternative strategies fund in Canada out of 497 funds for the three years ending April 30, 2017. The recognition was well earned – series F of the LP had an annualized return of 23% since inception and a cumulative return of 155%. The Focused Plus mandate comes in two structures: the Portland Focused Plus Fund, a trust available for purchase by registered plans, and the Portland Focused Plus Fund LP, which is a limited partnership intended for non-registered assets. Aside from the impressive returns, Portland Investment Counsel’s Focused Plus lineup is also differentiated by its compensation model. “One of the innovative things we did with this mandate is create two series for highernet-worth investors,” Cole says. “If they invest at least $1 million in the LP (or $500,000 in the fund), there are substantially lower fees. In fact, we have one series, Series P, which has no management fee at all. So we only make money if the fund and LP perform. It aligns our interests with those of the investors.”

Achieving above-average returns each year, despite some wild swings in the markets, doesn’t come easy. In his decades as a portfolio manager specializing in Canadian and US equities, Cole has developed strict criteria for his funds. It’s an approach that has served him well over the years, and it can be broken down into two central pillars. “One of the key strategies is prudent use of a variable amount of leverage,” he says. “I never know what equity markets are going to do, but I’ve been at this business for over 30 years, so I have a pretty good sense of when stocks are getting more expensive in terms of valuations. When things decline and valuations become more attractive, which was the case in early 2016, we added a lot to the funds’ investments using leverage, borrowing at today’s really cheap interest rates.” The opposite is true when Cole believes stocks are overpriced, which is why he’s holding large cash positions with his funds today. His second key strategy is something that makes his funds unique not just in Canada, but worldwide. “The other main factor is focus,” he says. “By focus we mean the number of holdings and percentage weight. To my knowledge, I run the most focused fund in the world. We typically have 150% invested, with that 150% being borrowed and spread over about six companies. Six companies with a 25% average weight – if there is a more focused fund than that, I would like to see it.” Of course, when holding a small amount of stocks, making the right choice is essential.

Cole looks for established names with a market cap above $10 billion that are diversified by customer base, sector and geography. These companies are less vulnerable if a major downturn should occur, and in Canada in 2017, he’s looking to one sector in particular. “At the beginning of 2016, the Canadian banks were way out of favour because of concerns about energy-related loan losses,” Cole says. “I did not share those concerns – the banks are cash-flow machines, and they can power through any loan losses likely to arise. So I bought Canadian banks and then subsequently US banks that also fell out of favour – JPMorgan Chase, Citigroup, Wells Fargo – and they have performed extremely well.” Nearly a decade away from the US subprime mortgage crisis, the Canadian real estate market currently appears to be similarly vulnerable. According to Cole, there are key differences between the US housing market in 2007 and Canada today – the presence of CMHC in particular – that make the banks a