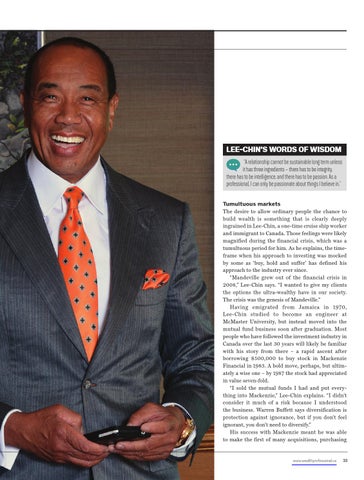 LEE-CHIN’S WORDS OF WISDOM “A relationship cannot be sustainable long term unless it has three ingredients – there has to be integrity, there has to be intelligence, and there has to be passion. As a professional, I can only be passionate about things I believe in.” Tumultuous markets The desire to allow ordinary people the chance to build wealth is something that is clearly deeply ingrained in Lee-Chin, a one-time cruise ship worker and immigrant to Canada. Those feelings were likely magnified during the financial crisis, which was a tumultuous period for him. As he explains, the timeframe when his approach to investing was mocked by some as ‘buy, hold and suffer’ has defined his approach to the industry ever since. “Mandeville grew out of the financial crisis in 2008,” Lee-Chin says. “I wanted to give my clients the options the ultra-wealthy have in our society. The crisis was the genesis of Mandeville.” Having emigrated from Jamaica in 1970, Lee-Chin studied to become an engineer at McMaster University, but instead moved into the mutual fund business soon after graduation. Most people who have followed the investment industry in Canada over the last 30 years will likely be familiar with his story from there – a rapid ascent after borrowing $500,000 to buy stock in Mackenzie Financial in 1983. A bold move, perhaps, but ultimately a wise one – by 1987 the stock had appreciated in value seven-fold. “I sold the mutual funds I had and put everything into Mackenzie,” Lee-Chin explains. “I didn’t consider it much of a risk because I understood the business. Warren Buffett says diversification is protection against ignorance, but if you don’t feel ignorant, you don’t need to diversify.” His success with Mackenzie meant he was able to make the first of many acquisitions, purchasing