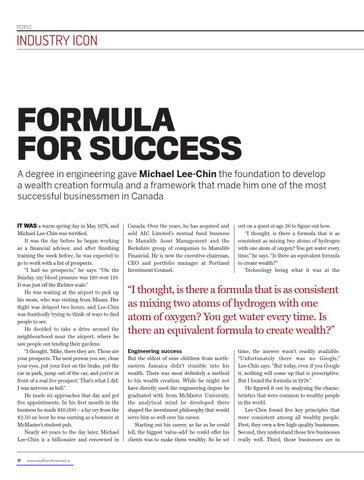 FORMULA FOR SUCCESS A degree in engineering gave Michael Lee-Chin the foundation to develop a wealth creation formula and a framework that made him one of the most successful businessmen in Canada IT WAS a warm spring day in May 1976, and Michael Lee-Chin was terrified. It was the day before he began working as a financial advisor, and after finishing training the week before, he was expected to go to work with a list of prospects. “I had no prospects,” he says. “On the Sunday, my blood pressure was 190 over 110. It was just off the Richter scale.” He was waiting at the airport to pick up his mom, who was visiting from Miami. Her flight was delayed two hours, and Lee-Chin was frantically trying to think of ways to find people to see. He decided to take a drive around the neighbourhood near the airport, where he saw people out tending their gardens. “I thought, ‘Mike, there they are. Those are your prospects. The next person you see, close your eyes, put your foot on the brake, put the car in park, jump out of the car, and you’re in front of a real live prospect.’ That’s what I did. I was nervous as hell.” He made six approaches that day and got five appointments. In his first month in the business he made $10,000 – a far cry from the $2.50 an hour he was earning as a bouncer at McMaster’s student pub. Nearly 40 years to the day later, Michael Lee-Chin is a billionaire and renowned in

Canada. Over the years, he has acquired and sold AIC Limited’s mutual fund business to Manulife Asset Management and the Berkshire group of companies to Manulife Financial. He is now the executive chairman, CEO and portfolio manager at Portland Investment Counsel.

out on a quest at age 26 to figure out how. “I thought, is there a formula that is as consistent as mixing two atoms of hydrogen with one atom of oxygen? You get water every time,” he says. “Is there an equivalent formula to create wealth?” Technology being what it was at the

“I thought, is there a formula that is as consistent as mixing two atoms of hydrogen with one atom of oxygen? You get water every time. Is there an equivalent formula to create wealth?” Engineering success But the eldest of nine children from northeastern Jamaica didn’t stumble into his wealth. There was most definitely a method to his wealth creation. While he might not have directly used the engineering degree he graduated with from McMaster University, the analytical mind he developed there shaped the investment philosophy that would serve him so well over his career. Starting out his career, as far as he could tell, the biggest ‘value-add’ he could offer his clients was to make them wealthy. So he set

time, the answer wasn’t readily available. “Unfortunately there was no Google,” Lee-Chin says. “But today, even if you Google it, nothing will come up that is prescriptive. But I found the formula in 1978.” He figured it out by analyzing the characteristics that were common to wealthy people in the world. Lee-Chin found five key principles that were consistent among all wealthy people. First, they own a few high-quality businesses. Second, they understand those few businesses really well. Third, those businesses are in