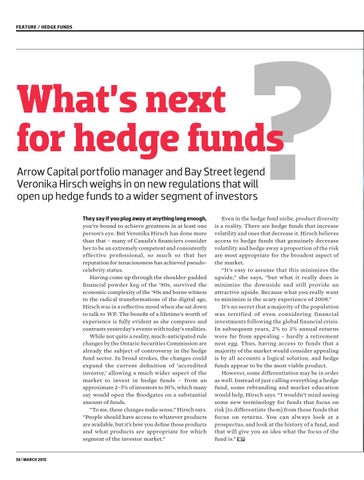 What’s next for hedge funds Arrow Capital portfolio manager and Bay Street legend Veronika Hirsch weighs in on new regulations that will open up hedge funds to a wider segment of investors They say if you plug away at anything long enough, you’re bound to achieve greatness in at least one person’s eye. But Veronika Hirsch has done more than that – many of Canada’s financiers consider her to be an extremely competent and consistently effective professional, so much so that her reputation for tenaciousness has achieved pseudocelebrity status. Having come up through the shoulder-padded financial powder keg of the ’80s, survived the economic complexity of the ’90s and borne witness to the radical transformations of the digital age, Hirsch was in a reflective mood when she sat down to talk to WP. The benefit of a lifetime’s worth of experience is fully evident as she compares and contrasts yesterday’s events with today’s realities. While not quite a reality, much-anticipated rule changes by the Ontario Securities Commission are already the subject of controversy in the hedge fund sector. In broad strokes, the changes could expand the current definition of ‘accredited investor,’ allowing a much wider aspect of the market to invest in hedge funds – from an approximate 2–5% of investors to 30%, which many say would open the floodgates on a substantial amount of funds. “To me, these changes make sense,” Hirsch says. “People should have access to whatever products are available, but it’s how you define those products and what products are appropriate for which segment of the investor market.”

Even in the hedge fund niche, product diversity is a reality. There are hedge funds that increase volatility and ones that decrease it. Hirsch believes access to hedge funds that genuinely decrease volatility and hedge away a proportion of the risk are most appropriate for the broadest aspect of the market. “It’s easy to assume that this minimizes the upside,” she says, “but what it really does is minimize the downside and still provide an attractive upside. Because what you really want to minimize is the scary experience of 2008.” It’s no secret that a majority of the population was terrified of even considering financial investments following the global financial crisis. In subsequent years, 2% to 3% annual returns were far from appealing – hardly a retirement nest egg. Thus, having access to funds that a majority of the market would consider appealing is by all accounts a logical solution, and hedge funds appear to be the most viable product. However, some differentiation may be in order as well. Instead of just calling everything a hedge fund, some rebranding and market education would help, Hirsch says. “I wouldn’t mind seeing some new terminology for funds that focus on risk [to differentiate them] from those funds that focus on returns. You can always look at a prospectus, and look at the history of a fund, and that will give you an idea what the focus of the fund is.”