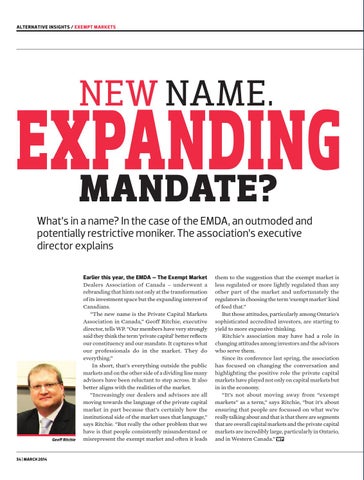 MANDATE? What’s in a name? In the case of the EMDA, an outmoded and potentially restrictive moniker. The association’s executive director explains

Earlier this year, the EMDA – The Exempt Market Dealers Association of Canada – underwent a rebranding that hints not only at the transformation of its investment space but the expanding interest of Canadians. “The new name is the Private Capital Markets Association in Canada,” Geoff Ritchie, executive director, tells WP. “Our members have very strongly said they think the term ‘private capital’ better reflects our constituency and our mandate. It captures what our professionals do in the market. They do everything.” In short, that’s everything outside the public markets and on the other side of a dividing line many advisors have been reluctant to step across. It also better aligns with the realities of the market. “Increasingly our dealers and advisors are all moving towards the language of the private capital market in part because that’s certainly how the institutional side of the market uses that language,” says Ritchie. “But really the other problem that we have is that people consistently misunderstand or misrepresent the exempt market and often it leads

them to the suggestion that the exempt market is less regulated or more lightly regulated than any other part of the market and unfortunately the regulators in choosing the term ‘exempt market’ kind of feed that.” But those attitudes, particularly among Ontario’s sophisticated accredited investors, are starting to yield to more expansive thinking. Ritchie’s association may have had a role in changing attitudes among investors and the advisors who serve them. Since its conference last spring, the association has focused on changing the conversation and highlighting the positive role the private capital markets have played not only on capital markets but in in the economy. “It’s not about moving away from “exempt markets” as a term,” says Ritchie, “but it’s about ensuring that people are focussed on what we’re really talking about and that is that there are segments that are overall capital markets and the private capital markets are incredibly large, particularly in Ontario, and in Western Canada.”

The return of Michael Lee-Chin; Succession plan success; and the inside scoop on Richardson transfer

The return of Michael Lee-Chin; Succession plan success; and the inside scoop on Richardson transfer