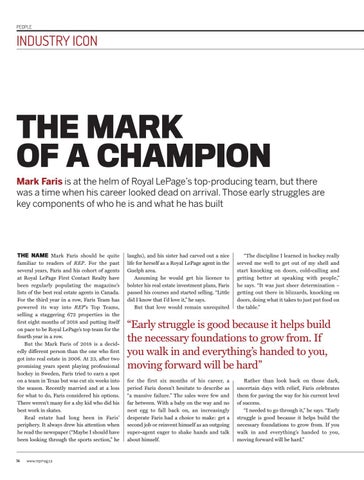 THE MARK OF A CHAMPION Mark Faris is at the helm of Royal LePage’s top-producing team, but there was a time when his career looked dead on arrival. Those early struggles are key components of who he is and what he has built

THE NAME Mark Faris should be quite familiar to readers of REP. For the past several years, Faris and his cohort of agents at Royal LePage First Contact Realty have been regularly populating the magazine’s lists of the best real estate agents in Canada. For the third year in a row, Faris Team has powered its way into REP’s Top Teams, selling a staggering 672 properties in the first eight months of 2018 and putting itself on pace to be Royal LePage’s top team for the fourth year in a row. But the Mark Faris of 2018 is a decidedly different person than the one who first got into real estate in 2006. At 23, after two promising years spent playing professional hockey in Sweden, Faris tried to earn a spot on a team in Texas but was cut six weeks into the season. Recently married and at a loss for what to do, Faris considered his options. There weren’t many for a shy kid who did his best work in skates. Real estate had long been in Faris’ periphery. It always drew his attention when he read the newspaper (“Maybe I should have been looking through the sports section,” he

laughs), and his sister had carved out a nice life for herself as a Royal LePage agent in the Guelph area. Assuming he would get his licence to bolster his real estate investment plans, Faris passed his courses and started selling. “Little did I know that I’d love it,” he says. But that love would remain unrequited

“The discipline I learned in hockey really served me well to get out of my shell and start knocking on doors, cold-calling and getting better at speaking with people,” he says. “It was just sheer determination – getting out there in blizzards, knocking on doors, doing what it takes to just put food on the table.”

“Early struggle is good because it helps build the necessary foundations to grow from. If you walk in and everything’s handed to you, moving forward will be hard” for the first six months of his career, a period Faris doesn’t hesitate to describe as “a massive failure.” The sales were few and far between. With a baby on the way and no nest egg to fall back on, an increasingly desperate Faris had a choice to make: get a second job or reinvent himself as an outgoing super-agent eager to shake hands and talk about himself.

Rather than look back on those dark, uncertain days with relief, Faris celebrates them for paving the way for his current level of success. “I needed to go through it,” he says. “Early struggle is good because it helps build the necessary foundations to grow from. If you walk in and everything’s handed to you, moving forward will be hard.”