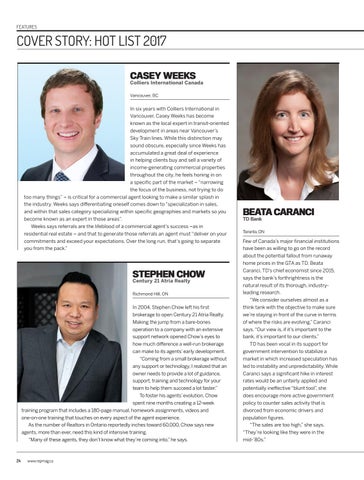 In six years with Colliers International in Vancouver, Casey Weeks has become known as the local expert in transit-oriented development in areas near Vancouver’s Sky Train lines. While this distinction may sound obscure, especially since Weeks has accumulated a great deal of experience in helping clients buy and sell a variety of income-generating commercial properties throughout the city, he feels honing in on a specific part of the market – “narrowing the focus of the business, not trying to do too many things” – is critical for a commercial agent looking to make a similar splash in the industry. Weeks says differentiating oneself comes down to “specialization in sales, and within that sales category specializing within specific geographies and markets so you become known as an expert in those areas”. Weeks says referrals are the lifeblood of a commercial agent’s success –as in residential real estate – and that to generate those referrals an agent must “deliver on your commitments and exceed your expectations. Over the long run, that’s going to separate you from the pack.”

In 2004, Stephen Chow left his first brokerage to open Century 21 Atria Realty. Making the jump from a bare-bones operation to a company with an extensive support network opened Chow’s eyes to how much difference a well-run brokerage can make to its agents’ early development. “Coming from a small brokerage without any support or technology, I realized that an owner needs to provide a lot of guidance, support, training and technology for your team to help them succeed a lot faster.” To foster his agents’ evolution, Chow spent nine months creating a 12-week training program that includes a 180-page manual, homework assignments, videos and one-on-one training that touches on every aspect of the agent experience. As the number of Realtors in Ontario reportedly inches toward 60,000, Chow says new agents, more than ever, need this kind of intensive training. “Many of these agents, they don’t know what they’re coming into,” he says.

Few of Canada’s major financial institutions have been as willing to go on the record about the potential fallout from runaway home prices in the GTA as TD. Beata Caranci, TD’s chief economist since 2015, says the bank’s forthrightness is the natural result of its thorough, industryleading research. “We consider ourselves almost as a think tank with the objective to make sure we’re staying in front of the curve in terms of where the risks are evolving,” Caranci says. “Our view is, if it’s important to the bank, it’s important to our clients.” TD has been vocal in its support for government intervention to stabilize a market in which increased speculation has led to instability and unpredictability. While Caranci says a significant hike in interest rates would be an unfairly applied and potentially ineffective “blunt tool”, she does encourage more active government policy to counter sales activity that is divorced from economic drivers and population figures. “The sales are too high,” she says. “They’re looking like they were in the mid-’80s.”