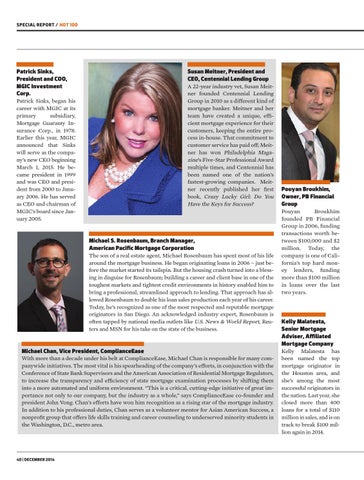 Susan Meitner, President and CEO, Centennial Lending Group A 22-year industry vet, Susan Meitner founded Centennial Lending Group in 2010 as a different kind of mortgage banker. Meitner and her team have created a unique, efficient mortgage experience for their customers, keeping the entire process in-house. That commitment to customer service has paid off; Meitner has won Philadelphia Magazine’s Five-Star Professional Award multiple times, and Centennial has been named one of the nation’s fastest-growing companies. Meitner recently published her first book, Crazy Lucky Girl: Do You Have the Keys for Success?

Patrick Sinks, began his career with MGIC at its primary subsidiary, Mortgage Guaranty Insurance Corp., in 1978. Earlier this year, MGIC announced that Sinks will serve as the company’s new CEO beginning March 1, 2015. He became president in 1999 and was CEO and president from 2000 to January 2006. He has served as CEO and chairman of MGIC’s board since January 2005.

Michael S. Rosenbaum, Branch Manager, American Pacific Mortgage Corporation The son of a real estate agent, Michael Rosenbaum has spent most of his life around the mortgage business. He began originating loans in 2006 – just before the market started its tailspin. But the housing crash turned into a blessing in disguise for Rosenbaum; building a career and client base in one of the toughest markets and tightest credit environments in history enabled him to bring a professional, streamlined approach to lending. That approach has allowed Rosenbaum to double his loan sales production each year of his career. Today, he’s recognized as one of the most respected and reputable mortgage originators in San Diego. An acknowledged industry expert, Rosenbaum is often tapped by national media outlets like U.S. News & World Report, Reuters and MSN for his take on the state of the business.

Michael Chan, Vice President, ComplianceEase With more than a decade under his belt at ComplianceEase, Michael Chan is responsible for many companywide initiatives. The most vital is his spearheading of the company’s efforts, in conjunction with the Conference of State Bank Supervisors and the American Association of Residential Mortgage Regulators, to increase the transparency and efficiency of state mortgage examination processes by shifting them into a more automated and uniform environment. “This is a critical, cutting-edge initiative of great importance not only to our company, but the industry as a whole,” says ComplianceEase co-founder and president John Vong. Chan’s efforts have won him recognition as a rising star of the mortgage industry. In addition to his professional duties, Chan serves as a volunteer mentor for Asian American Success, a nonprofit group that offers life skills training and career counseling to underserved minority students in the Washington, D.C., metro area.

Kelly Malatesta, Senior Mortgage Adviser, Affiliated Mortgage Company Kelly Malatesta has been named the top mortgage originator in the Houston area, and she’s among the most successful originators in the nation. Last year, she closed more than 400 loans for a total of $110 million in sales, and is on track to break $100 million again in 2014.