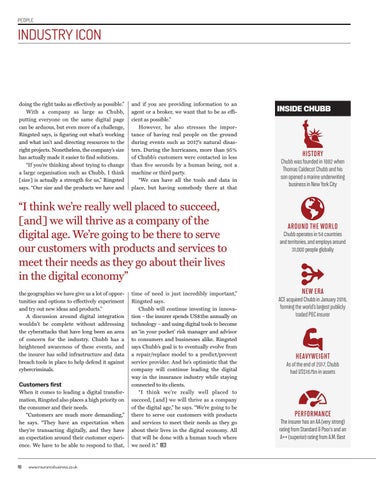 doing the right tasks as effectively as possible.” With a company as large as Chubb, putting everyone on the same digital page can be arduous, but even more of a challenge, Ringsted says, is figuring out what’s working and what isn’t and directing resources to the right projects. Nonetheless, the company’s size has actually made it easier to find solutions. “If you’re thinking about trying to change a large organisation such as Chubb, I think [size] is actually a strength for us,” Ringsted says. “Our size and the products we have and

and if you are providing information to an agent or a broker, we want that to be as efficient as possible.” However, he also stresses the importance of having real people on the ground during events such as 2017’s natural disasters. During the hurricanes, more than 95% of Chubb’s customers were contacted in less than five seconds by a human being, not a machine or third party. “We can have all the tools and data in place, but having somebody there at that

“I think we’re really well placed to succeed, [and] we will thrive as a company of the digital age. We’re going to be there to serve our customers with products and services to meet their needs as they go about their lives in the digital economy” the geographies we have give us a lot of opportunities and options to effectively experiment and try out new ideas and products.” A discussion around digital integration wouldn’t be complete without addressing the cyberattacks that have long been an area of concern for the industry. Chubb has a heightened awareness of these events, and the insurer has solid infrastructure and data breach tools in place to help defend it against cybercriminals.

Customers first When it comes to leading a digital transformation, Ringsted also places a high priority on the consumer and their needs. “Customers are much more demanding,” he says. “They have an expectation when they’re transacting digitally, and they have an expectation around their customer experience. We have to be able to respond to that,

time of need is just incredibly important,” Ringsted says. Chubb will continue investing in innovation – the insurer spends US$1bn annually on technology – and using digital tools to become an ‘in your pocket’ risk manager and advisor to consumers and businesses alike. Ringsted says Chubb’s goal is to eventually evolve from a repair/replace model to a predict/prevent service provider. And he’s optimistic that the company will continue leading the digital way in the insurance industry while staying connected to its clients. “I think we’re really well placed to succeed, [and] we will thrive as a company of the digital age,” he says. “We’re going to be there to serve our customers with products and services to meet their needs as they go about their lives in the digital economy. All that will be done with a human touch where we need it.”

AROUND THE WORLD Chubb operates in 54 countries and territories, and employs around 31,000 people globally

PERFORMANCE The insurer has an AA (very strong) rating from Standard & Poor’s and an A++ (superior) rating from A.M. Best