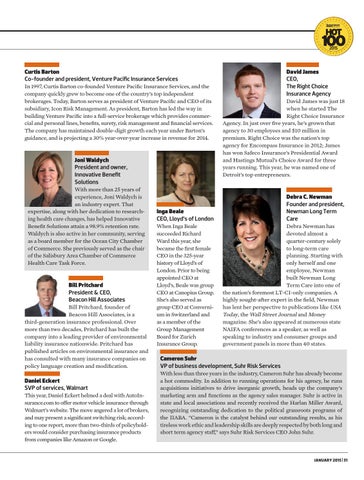 Curtis Barton Co-founder and president, Venture Pacific Insurance Services In 1997, Curtis Barton co-founded Venture Pacific Insurance Services, and the company quickly grew to become one of the country’s top independent brokerages. Today, Barton serves as president of Venture Pacific and CEO of its subsidiary, Icon Risk Management. As president, Barton has led the way in building Venture Pacific into a full-service brokerage which provides commercial and personal lines, benefits, surety, risk management and financial services. The company has maintained double-digit growth each year under Barton’s guidance, and is projecting a 30% year-over-year increase in revenue for 2014.

Joni Waldych President and owner, Innovative Benefit Solutions With more than 25 years of experience, Joni Waldych is an industry expert. That expertise, along with her dedication to researching health care changes, has helped Innovative Benefit Solutions attain a 98.9% retention rate. Waldych is also active in her community, serving as a board member for the Ocean City Chamber of Commerce. She previously served as the chair of the Salisbury Area Chamber of Commerce Health Care Task Force.

Daniel Eckert SVP of services, Walmart This year, Daniel Eckert helmed a deal with AutoInsurance.com to offer motor vehicle insurance through Walmart’s website. The move angered a lot of brokers, and may present a significant switching risk; according to one report, more than two-thirds of policyholders would consider purchasing insurance products from companies like Amazon or Google.

Inga Beale CEO, Lloyd’s of London When Inga Beale succeeded Richard Ward this year, she became the first female CEO in the 325-year history of Lloyd’s of London. Prior to being appointed CEO at Lloyd’s, Beale was group CEO at Canopius Group. She’s also served as group CEO at Convernium in Switzerland and as a member of the Group Management Board for Zurich Insurance Group.

Debra Newman has devoted almost a quarter-century solely to long-term care planning. Starting with only herself and one employee, Newman built Newman Long Term Care into one of the nation’s foremost LT-CI-only companies. A highly sought-after expert in the field, Newman has lent her perspective to publications like USA Today, the Wall Street Journal and Money magazine. She’s also appeared at numerous state NAIFA conferences as a speaker, as well as speaking to industry and consumer groups and government panels in more than 40 states.

Cameron Suhr VP of business development, Suhr Risk Services With less than three years in the industry, Cameron Suhr has already become a hot commodity. In addition to running operations for his agency, he runs acquisitions initiatives to drive inorganic growth, heads up the company’s marketing arm and functions as the agency sales manager. Suhr is active in state and local associations and recently received the Harlan Miller Award, recognizing outstanding dedication to the political grassroots programs of the IIABA. “Cameron is the catalyst behind our outstanding results, as his tireless work ethic and leadership skills are deeply respected by both long and short term agency staff,” says Suhr Risk Services CEO John Suhr.