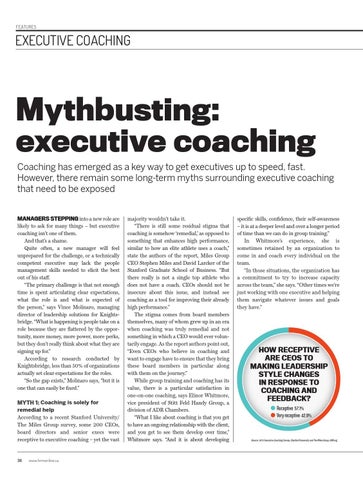 Mythbusting: executive coaching Coaching has emerged as a key way to get executives up to speed, fast. However, there remain some long-term myths surrounding executive coaching that need to be exposed MANAGERS STEPPING into a new role are likely to ask for many things – but executive coaching isn’t one of them. And that’s a shame. Quite often, a new manager will feel unprepared for the challenge, or a technically competent executive may lack the people management skills needed to elicit the best out of his staff. “The primary challenge is that not enough time is spent articulating clear expectations, what the role is and what is expected of the person,” says Vince Molinaro, managing director of leadership solutions for Knightsbridge. “What is happening is people take on a role because they are flattered by the opportunity, more money, more power, more perks, but they don’t really think about what they are signing up for.” According to research conducted by Knightsbridge, less than 50% of organizations actually set clear expectations for the roles. “So the gap exists,” Molinaro says, “but it is one that can easily be fixed.” MYTH 1: Coaching is solely for remedial help According to a recent Stanford University/ The Miles Group survey, some 200 CEOs, board directors and senior execs were receptive to executive coaching – yet the vast

majority wouldn’t take it. “There is still some residual stigma that coaching is somehow ‘remedial,’ as opposed to something that enhances high performance, similar to how an elite athlete uses a coach,” state the authors of the report, Miles Group CEO Stephen Miles and David Larcker of the Stanford Graduate School of Business. “But there really is not a single top athlete who does not have a coach. CEOs should not be insecure about this issue, and instead see coaching as a tool for improving their already high performance.” The stigma comes from board members themselves, many of whom grew up in an era when coaching was truly remedial and not something in which a CEO would ever voluntarily engage. As the report authors point out, “Even CEOs who believe in coaching and want to engage have to ensure that they bring these board members in particular along with them on the journey.” While group training and coaching has its value, there is a particular satisfaction in one-on-one coaching, says Elinor Whitmore, vice president of Stitt Feld Handy Group, a division of ADR Chambers. “What I like about coaching is that you get to have an ongoing relationship with the client, and you get to see them develop over time,” Whitmore says. “And it is about developing

specific skills, confidence, their self-awareness – it is at a deeper level and over a longer period of time than we can do in group training.” In Whitmore’s experience, she is sometimes retained by an organization to come in and coach every individual on the team. “In those situations, the organization has a commitment to try to increase capacity across the team,” she says. “Other times we’re just working with one executive and helping them navigate whatever issues and goals they have.”

HOW RECEPTIVE ARE CEOS TO MAKING LEADERSHIP STYLE CHANGES IN RESPONSE TO COACHING AND FEEDBACK? Receptive 57.1% Very receptive 42.9%