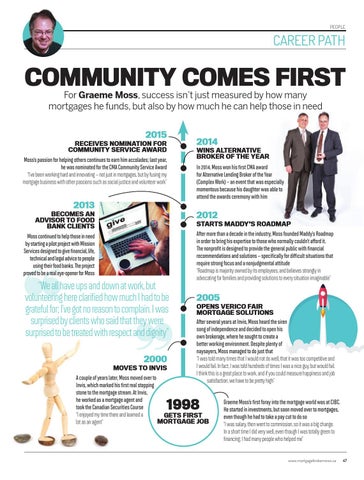 COMMUNITY COMES FIRST For Graeme Moss, success isn’t just measured by how many mortgages he funds, but also by how much he can help those in need 2015

RECEIVES NOMINATION FOR COMMUNITY SERVICE AWARD Moss’s passion for helping others continues to earn him accolades; last year, he was nominated for the CMA Community Service Award “I’ve been working hard and innovating – not just in mortgages, but by fusing my mortgage business with other passions such as social justice and volunteer work”

WINS ALTERNATIVE BROKER OF THE YEAR In 2014, Moss won his first CMA award for Alternative Lending Broker of the Year (Complex Work) – an event that was especially momentous because his daughter was able to attend the awards ceremony with him

Moss continued to help those in need by starting a pilot project with Mission Services designed to give financial, life, technical and legal advice to people using their food banks. The project proved to be a real eye-opener for Moss

“We all have ups and down at work, but volunteering here clarified how much I had to be grateful for; I’ve got no reason to complain. I was surprised by clients who said that they were surprised to be treated with respect and dignity” 2000

After more than a decade in the industry, Moss founded Maddy’s Roadmap in order to bring his expertise to those who normally couldn’t afford it. The nonprofit is designed to provide the general public with financial recommendations and solutions – specifically for difficult situations that require strong focus and a nonjudgmental attitude “Roadmap is majority owned by its employees, and believes strongly in advocating for families and providing solutions to every situation imaginable”

OPENS VERICO FAIR MORTGAGE SOLUTIONS After several years at Invis, Moss heard the siren song of independence and decided to open his own brokerage, where he sought to create a better working environment. Despite plenty of naysayers, Moss managed to do just that “I was told many times that I would not do well, that it was too competitive and I would fail. In fact, I was told hundreds of times I was a nice guy, but would fail. I think this is a great place to work, and if you could measure happiness and job satisfaction, we have to be pretty high”

A couple of years later, Moss moved over to Invis, which marked his first real stepping stone to the mortgage stream. At Invis, he worked as a mortgage agent and took the Canadian Securities Course “I enjoyed my time there and learned a GETS FIRST MORTGAGE JOB lot as an agent”

Graeme Moss’s first foray into the mortgage world was at CIBC. He started in investments, but soon moved over to mortgages, even though he had to take a pay cut to do so “I was salary, then went to commission, so it was a big change. In a short time I did very well, even though I was totally green to financing; I had many people who helped me”