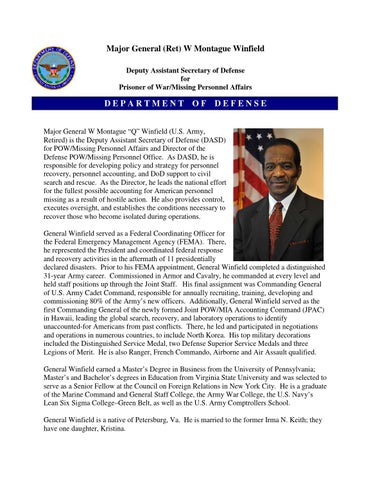 DEPARTMENT OF DEFENSE Major General W Montague “Q” Winfield (U.S. Army, Retired) is the Deputy Assistant Secretary of Defense (DASD) for POW/Missing Personnel Affairs and Director of the Defense POW/Missing Personnel Office. As DASD, he is responsible for developing policy and strategy for personnel recovery, personnel accounting, and DoD support to civil search and rescue. As the Director, he leads the national effort for the fullest possible accounting for American personnel missing as a result of hostile action. He also provides control, executes oversight, and establishes the conditions necessary to recover those who become isolated during operations. General Winfield served as a Federal Coordinating Officer for the Federal Emergency Management Agency (FEMA). There, he represented the President and coordinated federal response and recovery activities in the aftermath of 11 presidentially declared disasters. Prior to his FEMA appointment, General Winfield completed a distinguished 31-year Army career. Commissioned in Armor and Cavalry, he commanded at every level and held staff positions up through the Joint Staff. His final assignment was Commanding General of U.S. Army Cadet Command, responsible for annually recruiting, training, developing and commissioning 80% of the Army’s new officers. Additionally, General Winfield served as the first Commanding General of the newly formed Joint POW/MIA Accounting Command (JPAC) in Hawaii, leading the global search, recovery, and laboratory operations to identify unaccounted-for Americans from past conflicts. There, he led and participated in negotiations and operations in numerous countries, to include North Korea. His top military decorations included the Distinguished Service Medal, two Defense Superior Service Medals and three Legions of Merit. He is also Ranger, French Commando, Airborne and Air Assault qualified. General Winfield earned a Master’s Degree in Business from the University of Pennsylvania; Master’s and Bachelor’s degrees in Education from Virginia State University and was selected to serve as a Senior Fellow at the Council on Foreign Relations in New York City. He is a graduate of the Marine Command and General Staff College, the Army War College, the U.S. Navy’s Lean Six Sigma College–Green Belt, as well as the U.S. Army Comptrollers School. General Winfield is a native of Petersburg, Va. He is married to the former Irma N. Keith; they have one daughter, Kristina. 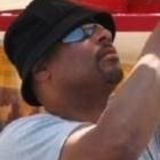