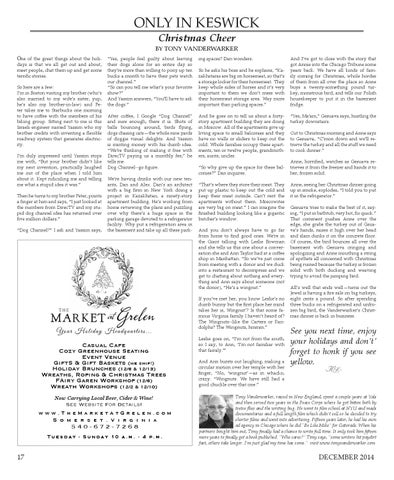 ONLY IN KESWICK Christmas Cheer

BY TONY VANDERWARKER One of the great things about the holidays is that we all get out and about, meet people, chat them up and get some terrific stories.

So here are a few: I’m in Boston visiting my brother (who’s also married to my wife’s sister, yup, he’s also my brother-in-law) and Peter takes me to Starbucks one morning to have coffee with the members of his biking group. Sitting next to me is this Israeli engineer named Yassim who my brother credits with inventing a flexible roadway system that generates electricity. I’m duly impressed until Yassim stops me with, “But your brother didn’t like my next invention, practically laughed me out of the place when I told him about it. Kept ridiculing me and telling me what a stupid idea it was.” Then he turns to my brother Peter, points a finger at him and says, “I just looked at the numbers from DirecTV and my stupid dog channel idea has returned over five million dollars.” “Dog Channel?” I ask and Yassim says,

“Yes, people feel guilty about leaving their dogs alone for an entire day so they’re more than willing to pony up ten bucks a month to have their pets watch our channel.” “So can you tell me what’s your favorite show?” And Yassim answers, “You’ll have to ask the dogs.”

After coffee, I Google “Dog Channel” and sure enough, there it is. Shots of balls bouncing around, birds flying, dogs chasing cats—the whole nine yards of doggie visual delights. And Yassim is minting money with his dumb idea. “We’re thinking of making it free with DirecTV paying us a monthly fee,” he tells me. Dog Channel--go figure.

And he goes on to tell us about a fortystory apartment building they are doing in Moscow. All of the apartments give up living space to small balconies and they have no walls or sliders to keep out the cold. Whole families occupy these apartments, ten or twelve people, grandmothers, aunts, uncles.

We’re having drinks with our new tenants, Dan and Alex. Dan’s an architect with a big firm in New York doing a project in Kazakhstan, a ninety-story apartment building. He’s working from home reviewing the plans and puzzling over why there’s a huge space in the parking garage devoted to a refrigerator facility. Why put a refrigeration area in the basement and take up all these park-

So he asks his boss and he explains, “Kazakhstanis are big on horsemeat, so that’s a storage locker for their horsemeat. They keep whole sides of horses and it’s very important to them we don’t mess with their horsemeat storage area. Way more important than parking spaces.”

“So why give up the space for these balconies?” Dan inquires. “That’s where they store their meat. They put up plastic to keep out the cold and keep their meat outside. Can’t rent the apartments without them. Moscowites are very big on meat.” I can imagine the finished building looking like a gigantic butcher’s window. And you don’t always have to go far from home to find good ones. We’re in the Giant talking with Leslie Bowman and she tells us this one about a conversation she and Ann Taylor had at a coffee shop in Manhattan. “So we’ve just come from meeting with a donor and we duck into a restaurant to decompress and we get to chatting about nothing and everything and Ann says about someone (not the donor), “He’s a wingnut.” If you’ve met her, you know Leslie’s no dumb bunny but the first place her mind takes her is, Wingnut’? Is that some famous Virginia family I haven’t heard of? The Wingnuts--like the Carters or Randolphs? The Wingnuts, hmmm.” Leslie goes on, “I’m not from the south, so I say, to Ann, ‘I’m not familiar with that family.’” And Ann bursts out laughing, making a circular motion over her temple with her finger, “No, ‘wingnut’—as in whacko, crazy. “Wingnuts. We have still had a good chuckle over that one.”

And I’ve got to close with the story that got Annie into the Chicago Tribune some years back. We have all kinds of family coming for Christmas, whole hordes of them from all over the place so Anne buys a twenty-something pound turkey, monstrous bird, and tells our Polish housekeeper to put it in the basement fridge. “Yes, Ma’am,” Gesuava says, hustling the turkey downstairs. Cut to Christmas morning and Anne says to Gesuava, “C’mon down and we’ll retrieve the turkey and all the stuff we need to cook dinner.” Anne, horrified, watches as Gesuava retrieves it from the freezer and hands it to her, frozen solid. Anne, seeing her Christmas dinner going up in smoke, explodes, “I told you to put it in the refrigerator.” Gesuava tries to make the best of it, saying, “I put in bathtub, very hot, fix quick.” That comment pushes Anne over the edge, she grabs the turkey out of Gsuava’s hands, raises it high over her head and slam dunks it on the concrete floor. Of course, the bird bounces all over the basement with Gesuava cringing and apologizing and Anne mouthing a string of epithets all concerned with Christmas being ruined because the turkey is frozen solid with both ducking and weaving trying to avoid the jumping bird. All’s well that ends well—turns out the Jewel is having a fire sale on big turkeys, eight cents a pound. So after spending three bucks on a refrigerated and unfrozen big bird, the Vanderwarker’s Christmas dinner is back in business.

See you next time, enjoy your holidays and don’t’ forget to honk if you see yellow.

Tony Vanderwarker, raised in New England, spent a couple years at Yale and then served two years in the Peace Corps where he got bitten both by tsetse flies and the writing bug. He went to film school at NYU and made documentaries and a full length film which didn’t sell so he decided to try shorter films and went into advertising. Fifteen years later, he had his own ad agency in Chicago where he did “Be Like Mike” for Gatorade. When his partners bought him out, Tony finally had a chance to write full time. It only took him fifteen more years to finally get a book published. “Who cares?” Tony says, “some writers hit paydirt fast, others take longer. I’m just glad my time has come.” visit www.tonyvanderwarker.com