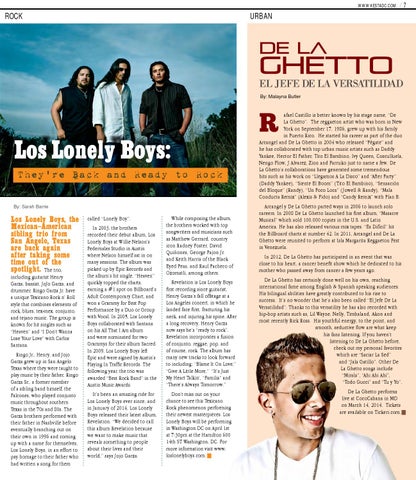 afael Castillo is better known by his stage name, “De La Ghetto”. The reggaeton artist who was born in New York on September 17, 1986, grew up with his family in Puerto Rico. He started his career as part of the duo Arcangel and De La Ghetto in 2004 who released “Pégate” and he has collaborated with top urban music artists such as Daddy Yankee, Hector El Father, Tito El Bambino, Ivy Queen, Cosculluela, Nengo Flow, J Alvarez, Zion and Farruko just to name a few. De La Ghetto’s collaborations have generated some tremendous hits such as his work on “Llegamos A La Disco” and “After Party” (Daddy Yankee), “Siente El Boom” (Tito El Bambino), “Sensación del Bloque” (Randy), “Un Poco Loca” ( Jowell & Randy), “Mala Conducta Remix” (Alexis & Fido) and “Candy Remix” with Plan B. By: Sarah Barrie

Los Lonely Boys, the Mexican-American sibling trio from San Angelo, Texas are back again after taking some time out of the spotlight. The trio, including guitarist Henry Garza, bassist, JoJo Garza, and drummer, Ringo Garza Jr. have a unique Texicano Rock n’ Roll style that combines elements of rock, blues, tex-mex, conjunto, and tejano music. The group is known for hit singles such as “Heaven” and “I Don’t Wanna Lose Your Love” with Carlos Santana.

Ringo Jr., Henry, and Jojo Garza grew up in San Angelo Texas where they were taught to play music by their father, Ringo Garza Sr., a former member of a sibling band himself, the Falcones, who played conjunto music throughout southern Texas in the 70s and 80s. The Garza brothers performed with their father in Nashville before eventually branching out on their own in 1996 and coming up with a name for themselves, Los Lonely Boys, in an effort to pay homage to their father who had written a song for them

called “Lonely Boy”. In 2003, the brothers recorded their debut album, Los Lonely Boys at Willie Nelson’s Pedernales Studio in Austin where Nelson himself sat in on many sessions. The album was picked up by Epic Records and the album’s hit single, “Heaven” quickly topped the charts, earning a #1 spot on Billboard’s Adult Contemporary Chart, and won a Grammy for Best Pop Performance by a Duo or Group with Vocal. In 2005, Los Lonely Boys collaborated with Santana on his All That I Am album and were nominated for two Grammys for their album Sacred. In 2009, Los Lonely Boys left Epic and were signed by Austin’s Playing In Traffic Records. The following year, the trio was awarded “Best Rock Band” in the Austin Music Awards. It’s been an amazing ride for Los Lonely Boys ever since, and in January of 2014, Los Lonely Boys released their latest album, Revelation. “We decided to call this album Revelation because we want to make music that reveals something to people about their lives and their world,” says Jojo Garza.

While composing the album, the brothers worked with top songwriters and musicians such as Matthew Gerrard, country icon Radney Foster, David Quiñones, George Pajon Jr. and Keith Harris of the Black Eyed Peas, and Raul Pacheco of Ozomatli, among others. Revelation is Los Lonely Boys first recording since guitarist, Henry Garza’s fall offstage at a Los Angeles concert, in which he landed face first, fracturing his neck, and injuring his spine. After a long recovery, Henry Garza now says he’s “ready to rock”. Revelation incorporates a fusion of conjunto, reggae, pop, and of course, rock. The album has many new tracks to look forward to including: “Blame It On Love,” “Give A Little More,” “It’s Just My Heart Talkin’, “Familia” and “There’s Always Tomorrow.” Don’t miss out on your chance to see this Texicano Rock phenomenon performing their newest masterpieces. Los Lonely Boys will be performing in Washington DC on April 1st at 7:30pm at the Hamilton 600 14th ST Washington, DC. For more information visit www. loslonelyboys.com. █

Arcangel y De La Ghetto parted ways in 2006 to launch solo careers. In 2008 De La Ghetto launched his first album, “Masacre Musical” which sold 100,000 copies in the U.S. and Latin America. He has also released various mix tapes. “Es Difícil” hit the Billboard charts at number 42. In 2011, Arcangel and De La Ghetto were reunited to perform at Isla Margarita Reggaeton Fest in Venezuela. In 2012, De La Ghetto has participated in an event that was close to his heart, a cancer benefit show which he dedicated to his mother who passed away from cancer a few years ago. De La Ghetto has certainly done well on his own, reaching international fame among English & Spanish speaking audiences. His bilingual abilities have greatly contributed to his rise to success. It’s no wonder that he’s also been called “El Jefe De La Versatilidad”. Thanks to this versatility he has also recorded with hip-hop artists such as, Lil Wayne, Nelly, Timbaland, Akon and most recently Rick Ross. His youthful energy, to the point, and smooth, seductive flow are what keep his fans listening. If you haven’t listening to De La Ghetto before, check out my personal favorites which are “Saciar La Sed” and “Jala Gatillo”. Other De La Ghetto songs include “Mirala”, “Ahi Ahi Ahi”, “Todo Gucci” and “Tu y Yo”. De La Ghetto performs live at CocoCabana in MD on March 14, 2014. Tickets are available on Tickeri.com. █