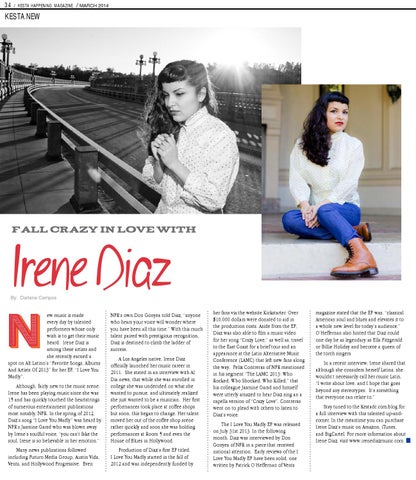 Fall Crazy in Love with

ew music is made every day by talented performers whose only wish is to get their music heard. Irene Diaz is among these artists and she recently earned a spot on Alt.Latino’s “Favorite Songs, Albums And Artists Of 2013” for her EP, “I Love You Madly”.

NPR’s own Don Gonyea told Diaz, “anyone who hears your voice will wonder where you have been all this time.” With this much talent paired with prestigious recognition, Diaz is destined to climb the ladder of success.

Although, fairly new to the music scene, Irene has been playing music since she was 15 and has quickly touched the heartstrings of numerous entertainment publications most notably, NPR. In the spring of 2012, Diaz’s song “I Love You Madly” was heard by NPR’s Jasmine Garsd who was blown away by Irene’s soulful voice, “you can’t fake the soul, Irene is so believable in her emotion.”

A Los Angeles native, Irene Diaz officially launched her music career in 2011. She stated in an interview with Al Dia news, that while she was enrolled in college she was undecided on what she wanted to pursue, and ultimately realized she just wanted to be a musician. Her first performances took place at coffee shops but soon, this began to change. Her talent moved her out of the coffee shop scene rather quickly and soon she was holding performances at Room 5 and even the House of Blues in Hollywood.

Production of Diaz’s first EP titled, I Love You Madly started in the fall of 2012 and was independently funded by

her fans via the website Kickstarter. Over $10,000 dollars were donated to aid in the production costs. Aside from the EP, Diaz was also able to film a music video for her song “Crazy Love,” as well as, travel to the East Coast for a brief tour and an appearance at the Latin Alternative Music Conference (LAMC) that left new fans along the way. Felix Contreras of NPR mentioned in his segment “The LAMC 2013: Who Rocked, Who Shocked, Who Killed,” that his colleague Jasmine Garsd and himself were utterly amazed to hear Diaz sing an a capella version of “Crazy Love”. Contreras went on to plead with others to listen to Diaz’s voice. The I Love You Madly EP was released on July 31st 2013. In the following month, Diaz was interviewed by Don Gonyea of NPR in a piece that received national attention. Early reviews of the I Love You Madly EP have been solid, one written by Patrick O’Heffernan of Vents

magazine stated that the EP was, “classical American soul and blues and elevates it to a whole new level for today’s audience.” O’Heffernan also hinted that Diaz could one day be as legendary as Ella Fitzgerald or Billie Holiday and become a queen of the torch singers. In a recent interview, Irene shared that although she considers herself Latina, she wouldn’t necessarily call her music Latin, “I write about love, and I hope that goes beyond any stereotypes. It’s something that everyone can relate to.” Stay tuned to the Kestadc.com/blog for a full interview with this talented up-andcomer. In the meantime you can purchase Irene Diaz’s music on Amazon, iTunes, and BigCartel. For more information about Irene Diaz, visit www.irenediazmusic.com. █