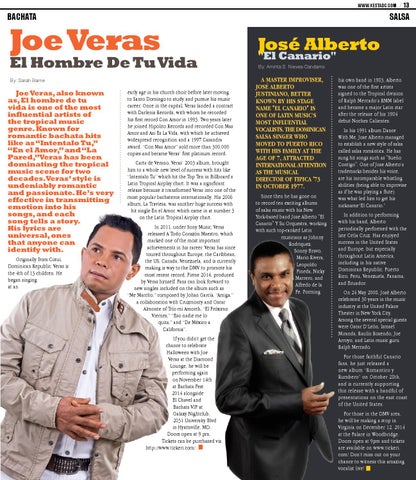 early age in his church choir before later moving to Santo Domingo to study and pursue his music career. Once in the capital, Veras landed a contract with Darlenis Records, with whom he recorded his first record Con Amor in 1993. Two years later he joined Hipolito Records and recorded Con Mas Amor and Asi Es La Vida, with which he achieved widespread recognition and a 1997 Casandra award. “Con Mas Amor” sold more than 300,000 copies and became Veras’ first platinum record. Carta de Verano, Veras’ 2003 album, brought him to a whole new level of success with hits like “Intentalo Tu” which hit the Top Ten in Billboard’s Latin Tropical Airplay chart. It was a significant release because it transformed Veras into one of the most popular bachateros internationally. His 2006 album, La Traviesa, was another huge success with hit single En el Amor, which came in at number 3 on the Latin Tropical Airplay chart.

Originally from Cotui, Dominican Republic, Veras is the 4th of 13 children. He began singing at an

In 2011, under Sony Music, Veras released A Todo Corazón Maestro, which marked one of the most important achievements in his career. Veras has since toured throughout Europe, the Caribbean, the US, Canada, Venezuela, and is currently making is way to the DMV to promote his most recent record, Firme 2014, produced by Veras himself. Fans can look forward to new singles included on the album such as “Me Marcho,” composed by Johan García, “Amiga,” a collaboration with Cruzmonty and Oscar Almonte of Trío mi Amorch, “El Próximo Viernes,” “Eso nadie me lo quita,” and “De México a California”. If you didn’t get the chance to celebrate Halloween with Joe Veras at the Diamond Lounge, he will be performing again on November 14th at Bachata Fest 2014 alongside El Chavel and Bachata VIP at Galaxy Nightclub, 2031 University Blvd in Hyattsville, MD. Doors open at 9 pm. Tickets can be purchased via http://www.tickeri.com/ . █

A MASTER IMPROVISER, JOSÉ ALBERTO JUSTINIANO, BETTER KNOWN BY HIS STAGE NAME "EL CANARIO" IS ONE OF LATIN MUSIC’S MOST INFLUENTIAL VOCALISTS. THE DOMINICAN SALSA SINGER WHO MOVED TO PUERTO RICO WITH HIS FAMILY AT THE AGE OF 7, ATTRACTED INTERNATIONAL ATTENTION AS THE MUSICAL DIRECTOR OF TIPICA '73 IN OCTOBER 1977. Since then he has gone on to record ten exciting albums of salsa music with his New York-based band Jose Alberto "El Canario" Y Su Orquestra, working with such top-ranked Latin musicians as Johnny Rodriquez, Sonny Bravo, Mario Rivera, Leopoldo Pineda, Nicky Marrero, and Alfredo de la Fe. Forming

his own band in 1983, Alberto was one of the first artists signed to the Tropical division of Ralph Mercado’s RMM label and became a major Latin star after the release of his 1984 debut Noches Calientes. In his 1991 album Dance With Me, Jose Alberto managed to establish a new style of salsa called salsa romántica. He has sung hit songs such as "Sueño Contigo". One of Jose Alberto’s trademarks besides his voice, are his incomparable whistling abilities (being able to improvise as if he was playing a flute) was what led him to get his nickname“El Canario.” In addition to performing with his band, Alberto periodically performed with the late Celia Cruz. Has enjoyed success in the United States and Europe, but especially throughout Latin America, including in his native Dominican Republic, Puerto Rico, Peru, Venezuela, Panama, and Ecuador. On 24 May 2008, José Alberto celebrated 30 years in the music industry at the United Palace Theater in New York City. Among the several special guests were Oscar D’León, Ismael Miranda, Raulín Rosendo, Joe Arroyo, and Latin music guru Ralph Mercado. For those faithful Canario fans, he just released a new album “Romantico y Rumbero” on October 28th, and is currently supporting this release with a handful of presentations on the east coast of the United States. For those in the DMV area, he will be making a stop in Virginia on December 12, 2014 at the Palace in Woodbridge. Doors open at 9pm and tickets are available on www.tickeri. com! Don’t miss out on your chance to witness this amazing vocalist live! █