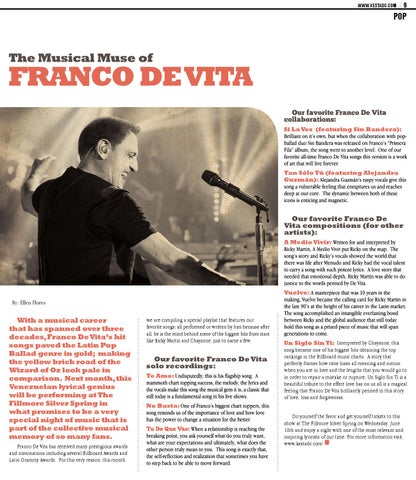 By: Ellen Flores we are compiling a special playlist that features our favorite songs; all performed or written by him because after all, he is the mind behind some of the biggest hits from stars like Ricky Martin and Chayanne, just to name a few.

Franco De Vita has received many prestigious awards and nominations including several Billboard Awards and Latin Grammy Awards. For this very reason, this month

Interpreted by Chayanne, this song became one of his biggest hits obtaining the top rankings in the Billboard music charts. A story that perfectly frames how time loses all meaning and notion when you are in love and the lengths that you would go to in order to repair a mistake or rupture, Un Siglo Sin Ti is a beautiful tribute to the effect love has on us all is a magical feeling that Franco De Vita brilliantly penned in this story of love, loss and forgiveness. Do yourself the favor and get yourself tickets to this show at The Fillmore Silver Spring on Wednesday, June 10th and enjoy a night with one of the most relevant and inspiring lyricists of our time. For more information visit, www.kestadc.com! â&#x2013;&#x2C6;