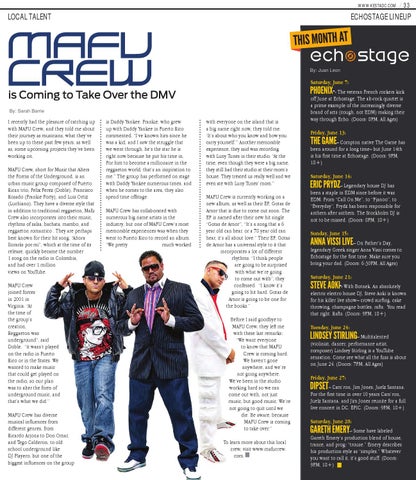 I recently had the pleasure of catching up with MAFU Crew, and they told me about their journey as musicians, what they’ve been up to these past few years, as well as, some upcoming projects they’ve been working on. MAFU Crew, short for Music that Alters the Forms of the Underground, is an urban music group composed of Puerto Rican trio, Felix Perez (Doble), Francisco Rosado (Frankie Forty), and Luis Ortiz (Luchiano). They have a diverse style that in addition to traditional reggaeton, Mafu Crew also incorporates into their music, rhythms of salsa, bachata, mambo, and reggaeton romantico . They are perhaps best known for their hit song, “Ahora llorarás por mi”, which at the time of its release, quickly became the number 1 song on the radio in Colombia, and had over 1 million views on YouTube. MAFU Crew joined forces in 2001 in Virginia. “At the time of the group’s creation, Reggaeton was underground”, said Doble, “it wasn’t played on the radio in Puerto Rico or in the States. We wanted to make music that could get played on the radio, so our plan was to alter the form of underground music, and that’s what we did.” MAFU Crew has diverse musical influences from different genres, from Ricardo Arjona to Don Omar, and Tego Calderon, to old school underground like DJ Playero, but one of the biggest influences on the group

is Daddy Yankee. Frankie, who grew up with Daddy Yankee in Puerto Rico commented, “I’ve known him since he was a kid, and I saw the struggle that we went through, he’s the star he is right now because he put his time in. For him to become a millionaire in the reggaeton world, that’s an inspiration to me.” The group has performed on stage with Daddy Yankee numerous times, and when he comes to the area, they also spend time offstage. MAFU Crew has collaborated with numerous big name artists in the industry, but one of MAFU Crew’s most memorable experiences was when they went to Puerto Rico to record an album. “We pretty much worked

with everyone on the island that is a big name right now, they told me. ‘It’s about who you know and how you carry yourself.’” Another memorable experience, they said was recording with Luny Tunes in their studio. “At the time, even though they were a big name, they still had their studio at their mom’s house. They treated us really well and we even ate with Luny Tunes’ mom.” MAFU Crew is currently working on a new album, as well as their EP, Gotas de Amor that is due to come out soon. The EP is named after their new hit single “Gotas de Amor”, “It’s a song that a 6 year old can hear, or a 78 year old can hear, it’s all about love.” Their EP, Gotas de Amor has a universal style to it that incorporates a lot of different rhythms. “I think people are going to be surprised with what we’re going to come out with”, they confessed. “I know it’s going to hit hard. Gotas de Amor is going to be one for the books.” Before I said goodbye to MAFU Crew, they left me with these last remarks: “We want everyone to know that MAFU Crew is coming hard. We haven’t gone anywhere, and we’re not going anywhere. We’ve been in the studio working hard so we can come out with, not just music, but good music. We’re not going to quit until we die. Be aware, because MAFU Crew is coming to take over.” To learn more about this local crew, visit www.mafucrew. com. █

- The veteran French rockers kick off June at Echostage. The alt-rock quartet is a prime example of the increasingly diverse brand of acts (cough, not EDM) making their way through Echo. (Doors: 8PM, All Ages) Friday, June 13: Compton native The Game has been around for a long time-- but June 14th is his first time at Echostage. (Doors: 9PM, 18+) Saturday, June 14: - Legendary house DJ has been a staple in EDM since before it was EDM. From “Call On Me”, to “Pjanoo”, to “Everyday”, Prydz has been responsible for anthem after anthem. The Stockholm DJ is not to be missed. (Doors: 8PM, 18+) Sunday, June 15: -- On Father’s Day, legendary Greek singer Anna Vissi comes to Echostage for the first time. Make sure you bring your dad. (Doors: 6:30PM, All Ages) Saturday, June 21: - With Botnek. An absolutely electric electro house DJ, Steve Aoki is known for his killer live show-- crowd surfing, cake throwing, champagne bottles, rafts. You read that right. Rafts. (Doors: 9PM, 18+) Tuesday, June 24: -- Multitalented (violinist, dancer, performance artist, composer) Lindsey Stirling is a YouTube sensation. Come see what all the fuss is about on June 24. (Doors: 7PM, All Ages) Friday, June 27: -- Cam’ron, Jim Jones, Juelz Santana. For the first time in over 10 years Cam’ron, Juelz Santana, and Jim Jones reunite for a full live concert in DC. EPIC. (Doors: 9PM, 18+) Saturday, June 28: - Some have labeled Gareth Emery’s production blend of house, trance, and prog; “trouse.” Emery describes his production style as “simples.” Whatever you want to call it, it’s good stuff. (Doors: 9PM, 18+) █