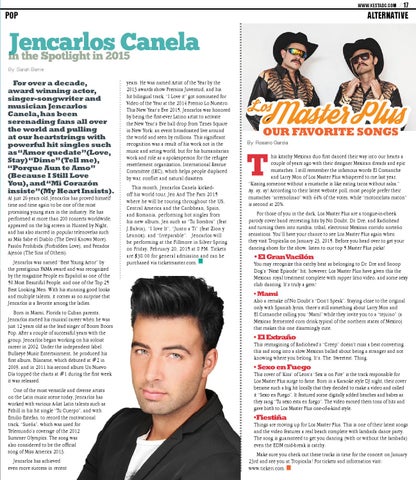 years. He was named Artist of the Year by the 2013 awards show Premios Juventud, and his hit bilingual track, “I Love it” got nominated for Video of the Year at the 2014 Premio Lo Nuestro. This New Year’s Eve 2015, Jencarlos was honored by being the first-ever Latino artist to activate the New Year’s Eve ball drop from Times Square in New York; an event broadcasted live around the world and seen by millions. This significant recognition was a result of his work not in the music and acting world, but for his humanitarian work and role as a spokesperson for the refugee resettlement organization, International Rescue Committee (IRC), which helps people displaced by war, conflict and natural disasters. At just 26 years old, Jencarlos has proved himself time and time again to be one of the most promising young stars in the industry. He has performed at more than 200 concerts worldwide, appeared on the big screen in Hunted by Night, and has also starred in popular telenovelas such as Más Sabe el Diablo (The Devil Knows More), Pasión Prohibida (Forbidden Love), and Pecados Ajenos (The Sins of Others). Jencarlos was named “Best Young Actor” by the prestigious FAMA award and was recognized by the magazine People en Español as one of the 50 Most Beautiful People, and one of the Top 25 Best Looking Men. With his stunning good looks and multiple talents, it comes as no surprise that Jencarlos is a favorite among the ladies. Born in Miami, Florida to Cuban parents, Jencarlos started his musical career when he was just 12 years old as the lead singer of Boom Boom Pop. After a couple of successful years with the group, Jencarlos began working on his soloist career in 2002. Under the independent label Bullseye Music Entertainment, he produced his first album, Búscame, which debuted at #2 in 2009, and in 2011 his second album Un Nuevo Día topped the charts at #1 during the first week it was released. One of the most versatile and diverse artists on the Latin music scene today, Jencarlos has worked with various A-list Latin talents such as Pitbill in his hit single “Tu Cuerpo”, and with Emilio Estefan, to record the motivational track, “Sueña”, which was used for Telemundo’s coverage of the 2012 Summer Olympics. The song was also considered to be the official song of Miss America 2013. Jencarlos has achieved even more success in recent

This month, Jencarlos Canela kickedoff his world tour, Jen And The Fam 2015 where he will be touring throughout the US, Central America and the Caribbean, Spain, and Romania, performing hot singles from his new album, Jen such as “Tu Sombra” (feat J.Balvin), “I love It”, “Junto a Ti” (feat Zion y Lennox), and “Irreparable”. Jencarlos will be performing at the Fillmore in Silver Spring on Friday, February 20, 2015 at 8 PM. Tickets are $38.00 for general admission and can be purchased via ticketmaster.com. █

his kitschy Mexican duo first danced their way into our hearts a couple of years ago with their designer Mexican dreads and epic mustaches. I still remember the infamous words El Comanche and Larry Mon of Los Master Plus whispered to me last year, “Kissing someone without a mustache is like eating tacos without salsa.” Ay, ay, ay! According to their latest website poll, most people prefer their mustaches “arremolinao” with 44% of the votes, while “motociclista maton” is second at 28%. For those of you in the dark, Los Master Plus are a tongue-in-cheek parody cover band recreating hits by No Doubt, Dr. Dre, and Radiohead and turning them into cumbia, tribal, electronic Mexican corrido norteño sensations. You’ll have your chance to see Los Master Plus again when they visit Tropicalia on January 23, 2015. Before you head over to get your dancing shoes for the show, listen to our top 5 Master Plus picks!

You may recognize this catchy beat as belonging to Dr. Dre and Snoop Dog’s “Next Episode” hit, however, Los Master Plus have given this the Mexican royal treatment complete with rapper limo video, and some sexy club dancing. It’s truly a gem! Also a remake of No Doubt’s “Don’t Speak”. Staying close to the original only with Spanish lyrics, there’s still something about Larry Mon and El Comanche calling you “Mami” while they invite you to a “tejuino” (a Mexican fermented corn drink typical of the northern states of Mexico) that makes this one disarmingly cute. This reimagining of Radiohead’s “Creep” doesn’t miss a beat converting this sad song into a slow Mexican ballad about being a stranger and not knowing where you belong. It’s. The. Sweetest. Thing. This cover of ‘Kins’ of Leon’s “Sex is on Fire” is the track responsible for Los Master Plus surge to fame. Born in a Karaoke style DJ night, their cover became such a big hit locally that they decided to make a video and called it “Sexo en Fuego”. It featured some digitally added beaches and babes as they sang “Tu sexo esta en fuego”. The video earned them tons of hits and gave birth to Los Master Plus one-of-a-kind style. Things are moving up for Los Master Plus. This is one of their latest songs and the video features a real beach complete with lambada dance party. The song is guaranteed to get you dancing (with or without the lambada) even the EDM mid-break is catchy. Make sure you check out these tracks in time for the concert on January 23rd and see you at Tropicalia! For tickets and information visit: www.tickeri.com. █