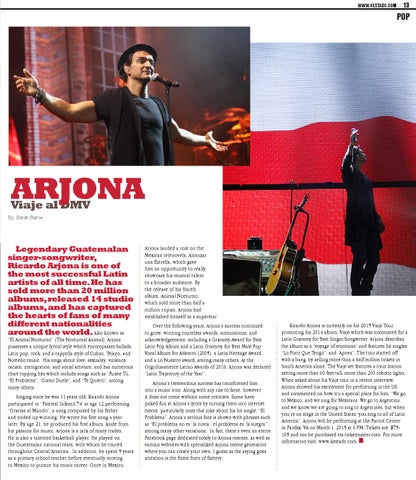 Arjona landed a role on the Mexican telenovela, Alcanzar una Estrella, which gave him an opportunity to really showcase his musical talent to a broader audience. By the release of his fourth album, Animal Nocturno, which sold more than half a million copies, Arjona had established himself as a superstar. Also known as “El Animal Nocturno” (The Nocturnal Animal), Arjona possesses a unique lyrical style which encompasses ballads, Latin pop, rock, and a cappella style of Cuban, Tejano, and Norteño music. His sings about love, sexuality, violence, racism, immigration, and social activism, and has numerous chart topping hits which include songs such as “Fuiste Tú, “El Problema”, “Como Duele”, and “Te Quiero”, among many others. Singing since he was 11 years old, Ricardo Arjona participated in “Festival Infantil 74’ at age 12 performing “Gracias al Mundo”, a song composed by his father, and ended up winning. He wrote his first song a year later. By age 21, he produced his first album. Aside from his passion for music, Arjona is a jack of many trades. He is also a talented basketball player. He played on the Guatemalan national team, with whom he toured throughout Central America. In addition, he spent 5 years as a primary school teacher before eventually moving to Mexico to pursue his music career. Once in Mexico,

Over the following years, Arjona’s success continued to grow, winning countless awards, nominations, and acknowledgements, including a Grammy Award for Best Latin Pop Album and a Latin Grammy for Best Male Pop Vocal Album for Adentro (2005), a Latin Heritage Award, and a Lo Nuestro award, among many others. At the Orgullosamente Latino Awards of 2010, Arjona was declared “Latin Trajectory of the Year”. Arjona’s tremendous success has transformed him into a music icon. Along with any rise to fame, however, it does not come without some criticism. Some have poked fun at Arjona’s lyrics by turning them into internet meme, particularly ones that joke about his hit single, “El Problema”. Arjona’s serious face is shown with phrases such as “El problema no es ‘la novia,’ el problema es ‘la suegra’”, among many other variations. In fact, there’s even an entire Facebook page dedicated solely to Arjona memes, as well as various websites with specialized Arjona meme generators where you can create your own. I guess as the saying goes, imitation is the finest form of flattery.

Ricardo Arjona is currently on his 2015 Viaje Tour, promoting his 2014 album, Viaje which was nominated for a Latin Grammy for Best Singer/Songwriter. Arjona describes the album as a “voyage of emotions” and features hit singles “Lo Poco Que Tengo”, and “Apnea”. The tour started off with a bang, by selling more than a half million tickets in South America alone. The Viaje set features a train station setting more than 60 feet tall, more than 200 robotic lights. When asked about his Viaje tour in a recent interview, Arjona showed his excitement for performing in the US and commented on how it’s a special place for him, “We go to Mexico, and we sing for Mexicans. We go to Argentina, and we know we are going to sing to Argentines, but when you’re on stage in the United States, you sing to all of Latin America”. Arjona will be performing at the Patriot Center in Fairfax, VA on March 1, 2015 at 6 PM. Tickets are $75165 and can be purchased via ticketmaster.com. For more information visit, www.kestadc.com. █