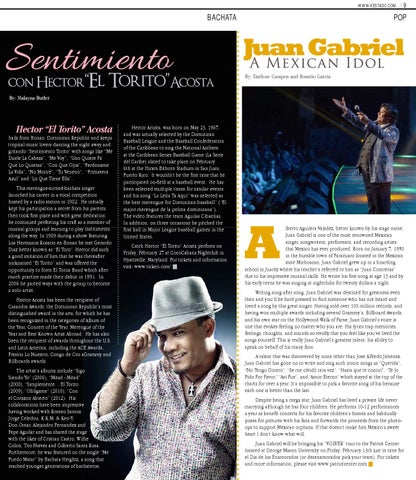 By: Darlene Campos and Rosario Garcia By: Malayna Butler

hails from Bonao, Dominican Republic and keeps tropical music lovers dancing the night away and gritando “Sentimiento Torito” with songs like “Me Duele La Cabeza”, “Me Voy”, “Uno Quiere Pa’ Que Lo Quieran”, “Con Que Ojos”, “Perdoname La Vida”, “No Moriré”, “Tu Veneno”, “Primavera Azul” and “Lo Que Tiene Ella”. This merengue-turned-bachata singer launched his career in a vocal competition hosted by a radio station in 1982. He initially kept his participation a secret from his parents then took first place and with great dedication he continued perfecting his craft as a member of musical groups and learning to play instruments along the way. In 1989 during a show featuring Los Hermanos Rosario en Bonao he met Gerardo Diaz better known as “El Toro”. Hector did such a good imitation of him that he was thereafter nicknamed “El Torito” and was offered the opportunity to form El Toros Band which after much practice made their debut in 1991. In 2006 he parted ways with the group to become a solo artist. Hector Acosta has been the recipient of Casandra Awards, the Dominican Republic’s most distinguished award in the arts, for which he has been recognized in the categories of Album of the Year, Concert of the Year, Merengue of the Year and Best Known Artist Abroad. He has also been the recipient of awards throughout the U.S. and Latin America, including the ACE Awards, Premio Lo Nuestro, Congo de Oro aGrammy and Billboards awards. The artist’s albums include “Sigo Siendo Yo” (2006), “Mitad - Mitad” (2008), “Simplemente…El Torito (2009), “Oblígame” (2010), “Con el Corazon Abierto” (2012). His collaborations have been impressive having worked with Romeo Santos, Jorge Celedon, R.K.M. & Ken-Y, Don Omar, Alejandro Fernandez and Pepe Aguilar and has shared the stage with the likes of Cristian Castro, Willie Colon, Tito Nieves and Gilberto Santa Rosa. Furthermore, he was featured on the single “Me Puedo Matar” by Bachata Heightz, a song that reached younger generations of bachateros.

Hector Acosta, was born on May 23, 1967, and was actually selected by the Dominican Baseball League and the Baseball Confederation of the Caribbean to sing the National Anthem at the Caribbean Series Baseball Game (La Serie del Caribe) slated to take place on February 6th at the Hiram Bithorn Stadium in San Juan, Puerto Rico. It wouldn’t be the first time that he participated on-field at a baseball event. He has been selected multiple times for similar events and his song “La Leña Ta Aqui” was selected as the best merengue for Dominican baseball” (“El major merengue de la pelota dominicana”). The video features the team Aguilas Cibaeñas. In addition, on three occasions he pitched the first ball in Major League baseball games in the United States. Catch Hector “El Torito” Acosta perform on Friday, February 27 at CocoCabana Nightclub in Hyattsville, Maryland. For tickets and information visit: www.tickeri.com! █

lberto Aguilera Valadez, better known by his stage name, Juan Gabriel is one of the most renowned Mexican singer, songwriters, performers, and recording artists that Mexico has ever produced. Born on January 7, 1950 in the humble town of Paracuaro located in the Mexican state Michoacan, Juan Gabriel grew up in a boarding school in Juarez where his teacher’s referred to him as “Juan Contreras” due to his impressive musical skills. He wrote his first song at age 13 and by his early teens he was singing at nightclubs for twenty dollars a night. Writing song after song, Juan Gabriel was destined for greatness even then and you’ll be hard pressed to find someone who has not heard and loved a song by this great singer. Having sold over 100 million records, and having won multiple awards including several Grammy’s, Billboard Awards, and his own star on the Hollywood Walk of Fame, Juan Gabriel’s voice is one that evokes feeling no matter who you are. His lyrics trap memories, feelings, thoughts, and sounds so vividly that you feel like you’ve lived the songs yourself. This is really Juan Gabriel’s greatest talent, his ability to speak on behalf of his many fans. A talent that was discovered by none other than Jose Alfredo Jimenez. Juan Gabriel has gone on to write and sing such iconic songs as “Querida”, “No Tengo Dinero”, “Se me olvidó otra vez”, “Hasta que te conocí”, “Te lo Pido Por Favor,” “Asi Fue”, and “Amor Eterno” which stayed at the top of the charts for over a year. It’s impossible to pick a favorite song of his because each one is better than the last. Despite being a mega star, Juan Gabriel has lived a private life never marrying although he has four children. He performs 10-12 performances a year as benefit concerts for his favorite children’s homes and habitually poses for pictures with his fans and forwards the proceeds from the photoops to support Mexican orphans. If that doesn’t make him Mexico’s sweet heart I don’t know what will. Juan Gabriel will be bringing his “VOLVER” tour to the Patriot Center located at George Mason University on Friday, February 13th just in time for el Dia de los Enamorados (or desenamorados pick your team). For tickets and more information, please visit www.patriotcenter.com █