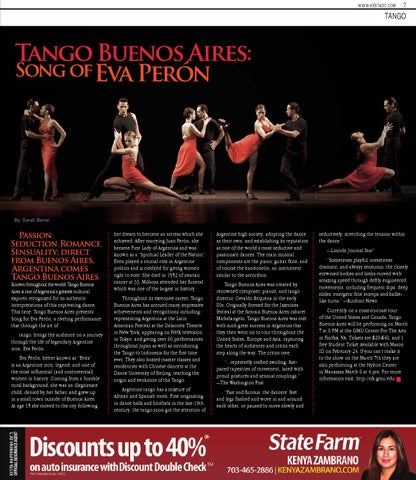 Known throughout the world, Tango Buenos Aires is one of Argentina’s greatest cultural exports recognized for its authentic interpretations of this captivating dance. This time, Tango Buenos Aires presents Song for Eva Perón, a riveting performance that through the art of tango, brings the audience on a journey through the life of legendary Argentine icon, Eva Perón. Eva Perón, better known as “Evita” is an Argentine icon, legend, and one of the most influential (and controversial) women in history. Coming from a humble rural background, she was an illegitimate child, denied by her father, and grew up in a small town outside of Buenos Aires. At age 15 she moved to the city following

her dream to become an actress which she achieved. After marrying Juan Perón, she became First Lady of Argentina and was known as a “Spiritual Leader of the Nation”. Evita played a crucial role in Argentine politics and is credited for giving women right to vote. She died in 1952 of ovarian cancer at 33. Millions attended her funeral which was one of the largest in history. Throughout its extensive career, Tango Buenos Aires has accrued many impressive achievements and recognitions including: representing Argentina at the Latin American Festival at the Delacorte Theatre in New York, appearing on NHK television in Tokyo, and giving over 60 performances throughout Japan as well as introducing the Tango to Indonesia for the first time ever. They also hosted master classes and residencies with Chinese dancers at the Dance University of Beijing, teaching the origin and evolution of the Tango. Argentine tango has a mixture of African and Spanish roots. First originating in dance halls and brothels in the late 19th century, the tango soon got the attention of

Argentine high society, adopting the dance as their own, and establishing its reputation as one of the world’s most seductive and passionate dances. The main musical components are the piano, guitar flute, and of course the bandoneón, an instrument similar to the accordion. Tango Buenos Aires was created by renowned composer, pianist, and tango director, Osvaldo Requena in the early 80s. Originally formed for the Jazmines festival at the famous Buenos Aires cabaret Michelangelo, Tango Buenos Aires was met with such great success in Argentina that they then went on to tour throughout the United States, Europe and Asia, capturing the hearts of audiences and critics each step along the way. The critics rave: “...repeatedly crafted swirling, fastpaced tapestries of movement, laced with proud postures and sensual couplings.” —The Washington Post “Fast and furious, the dancers’ feet and legs flashed and wove in and around each other, or paused to move slowly and

seductively, stretching the tension within the dance.” —Lincoln Journal Star” “Sometimes playful, sometimes dramatic, and always sensuous, the closely entwined bodies and limbs moved with amazing speed through deftly engineered movements, including frequent dips, deep slides, energetic foot stomps and balletlike turns.” —Ruidoso News Currently on a coast-to-coast tour of the United States and Canada, Tango Buenos Aires will be performing on March 7 at 8 PM at the GMU Center For The Arts in Fairfax, VA. Tickets are $29-$48, and 1 free Student Ticket Available with Mason ID on February 24. If you can’t make it to the show on the March 7th they are also performing at the Hylton Center in Manassas March 8 at 4 pm. For more information visit: http://cfa.gmu.edu █