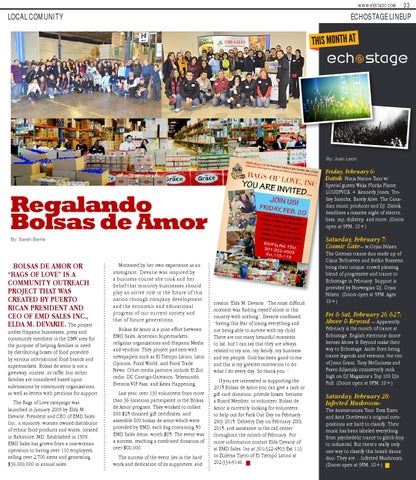 BOLSAS DE AMOR OR “BAGS OF LOVE” IS A COMMUNIT Y OUTREACH PROJECT THAT WAS CREATED BY PUERTO RICAN PRESIDENT AND CEO OF EMD SALES INC., ELDA M. DEVARIE. The project

unites Hispanic businesses, press and community members in the DMV area for the purpose of helping families in need by distributing boxes of food provided by various international food brands and supermarkets. Bolsas de amor is not a giveaway, contest, or raffle, but rather families are considered based upon submissions by community organizations, as well as letters with petitions for support. The Bags of Love campaign was launched in January 2009 by Elda M. Devarie, President and CEO of EMD Sales Inc., a minority, women owned distributor of ethnic food products and wines, located in Baltimore, MD. Established in 1989, EMD Sales has grown from a one-woman operation to having over 110 employees, selling over 2,700 items and generating $36,000,000 in annual sales.

Motivated by her own experience as an immigrant, Devarie was inspired by a business course she took and her belief that minority businesses should play an active role in the future of this nation through company development, and the economic and educational progress of our current society and that of future generations. Bolsas de Amor is a joint effort between EMD Sales, American Supermarkets, religious organizations and Hispanic Media and vendors. They project partners with newspapers such as El Tiempo Latino, Latin Opinion, Food World, and Food Trade News. Other media partners include El Zol radio, DC Contigo-Univision, Telemundo, Eventos VIP Pass, and Kesta Happening. Last year, over 130 volunteers from more than 36 locations participated in the Bolsas de Amor program. They worked to collect 800 $25 donated gift certificates, and assemble 800 bolsas de amor which were provided by EMD, each bag containing 50 EMD Sales items, worth $85. The event was a success, reaching a combined donation of over $88,000. The success of the event lies in the hard work and dedication of its supporters, and

creator, Elda M. Devarie. “The most difficult moment was finding myself alone in this country with nothing”, Devarie confessed, “having this fear of losing everything and not being able to survive with my child. There are too many beautiful moments to list, but I can say that they are always related to my son, my family, my business and my people. God has been good to me and this is my greatest motivation to do what I do every day. So thank you. “ If you are interested in supporting the 2015 Bolsas de Amor you can give a cash or gift card donation, provide boxes, become a Board Member, or volunteer. Bolsas de Amor is currently looking for volunteers to help out for Pack Out Day on February 20th 2015, Delivery Day on February 28th, 2015, and assistance in the call center throughout the month of February. For more information contact Elda Devarie of at EMD Sales, Inc at 301-322-4503 Ext 113, or Zulema Tijero of El Tiempo Latino at 202-334-9146. █

The German trance duo made up of Claus Terhoeven and Stefan Bossems bring their unique, crowd pleasing blend of progressive and trance to Echostage in February. Support is provided by Norwegian DJ, Orjan Nilsen. (Doors open at 9PM, Ages 18+)

February is the month of trance at Echostage. English electronic dance heroes Above & Beyond make their way to Echostage. Aside from being trance legends and veterans, the trio of Jono Grant, Tony McGuiness and Paavo Siljamaki consistently rank high on DJ Magazine’s Top 100 DJs Poll. (Doors open at 9PM, 18+)

The Animatronica Tour. Erez Eisen and Amit Duvdevani’s original compositions are hard to classify. Their music has been labeled everything from psychedelic trance to glitch-hop to industrial. But there’s really only one way to classify this Israeli dance duo: They are…Infected Mushroom. (Doors open at 9PM, 18+) █