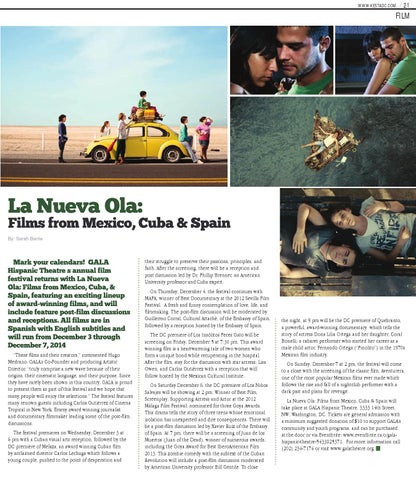 their struggle to preserve their passions, principles, and faith. After the screening, there will be a reception and post discussion led by Dr. Phillip Brenner, an American University professor and Cuba expert. On Thursday, December 4, the festival continues with MAPA, winner of Best Documentary at the 2012 Sevilla Film Festival. A fresh and funny contemplation of love, life, and filmmaking. The post-film discussion will be moderated by Guillermo Corral, Cultural Attaché, of the Embassy of Spain, followed by a reception hosted by the Embassy of Spain.

“These films and their creators,” commented Hugo Medrano, GALA’s Co-Founder and producing Artistic Director, “truly comprise a new wave because of their origins, their cinematic language, and their purpose. Since they have rarely been shown in this country, GALA is proud to present them as part of this festival and we hope that many people will enjoy the selections.” The festival features many renown guests including Carlos Gutierrez of Cinema Tropical in New York, Emmy award winning journalist and documentary filmmaker leading some of the post-film discussions. The festival premieres on Wednesday, December 3 at 6 pm with a Cuban visual arts reception, followed by the DC premiere of Melaza, an award winning Cuban film by acclaimed director Carlos Lechuga which follows a young couple, pushed to the point of desperation and

The DC premiere of Los Insólitos Peces Gato will be screening on Friday, December 5 at 7:30 pm. This award winning film is a heartwarming tale of two women who form a unique bond while recuperating in the hospital. After the film, stay for the discussion with star actress, Lisa Owen, and Carlos Gutiérrez with a reception that will follow hosted by the Mexican Cultural Institute. On Saturday December 6, the DC premiere of Los Niños Salvajes will be showing at 2 pm. Winner of Best Film, Screenplay, Supporting Actress and Actor at the 2012 Málaga Film Festival; nominated for three Goya Awards. This drama tells the story of three teens whose emotional isolation has unexpected and dire consequences. There will be a post-film discussion led by Xavier Ruiz of the Embassy of Spain. At 7 pm, there will be a screening of Juan de los Muertos ( Juan of the Dead), winner of numerous awards, including the Goya Award for Best IberoAmerican Film 2013. This zombie comedy with the subtext of the Cuban Revolution will include a post-film discussion moderated by American University professor Bill Gentile. To close

the night, at 9 pm will be the DC premiere of Quebranto, a powerful, award-winning documentary which tells the story of actress Dona Lilia Ortega and her daughter, Coral Bonelli, a cabaret performer who started her career as a male child actor, Fernando Ortega (“Pinolito”) in the 1970s Mexican film industry. On Sunday, December 7 at 2 pm, the festival will come to a close with the screening of the classic film, Aventurera, one of the most popular Mexican films ever made which follows the rise and fall of a nightclub performer with a dark past and plans for revenge. La Nueva Ola: Films from Mexico, Cuba & Spain will take place at GALA Hispanic Theatre, 3333 14th Street, NW, Washington, DC. Tickets are general admission with a minimum suggested donation of $10 to support GALA’s community and youth programs, and can be purchased at the door or via Eventbrite: www.eventbrite.ca/o/galahispanic-theatre-5433825371. For more information call (202) 234-7174 or visit www.galatheatre.org. █