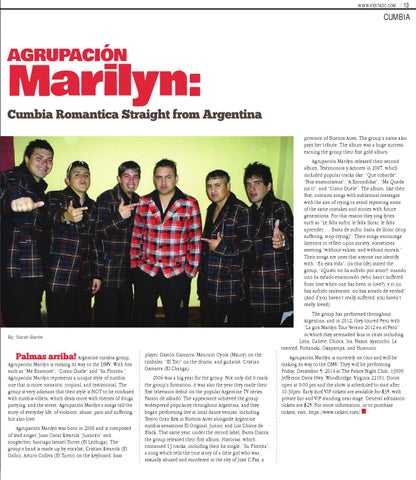 province of Buenos Aires. The group’s name also pays her tribute. The album was a huge success, earning the group their first gold album. Agrupación Marilyn released their second album, Testimonios y Amores in 2007, which included popular tracks like “Que cobarde”, “Nos enamoramos”, “A Escondidas”, “Me Quede sin ti”, and “Como Duele”. The album, like their first, contains songs with subliminal messages with the aim of trying to avoid repeating some of the same mistakes and stories with future generations. For this reason they sing lyrics such as “Le falta sufrir, le falta llorar, le falta aprender…. Basta de sufrir, basta de llorar (stop suffering, stop crying)”. Their songs encourage listeners to reflect upon society, sometimes seeming “without values, and without morals.” Their songs are ones that anyone can identify with. “En esta vida”, (in this life) stated the group, “¿Quién no ha sufrido por amor?, cuando uno ha estado enamorado (who hasn’t suffered from love when one has been in love?), y si no haz sufrido realmente, no haz amado de verdad” (And if you haven’t really suffered, you haven’t really loved).

Argentine cumbia group, Agrupación Marilyn is making its way to the DMV. With hits such as “Me Enamoré”, “Como Duele” and “Su Florcita,” Agrupación Marilyn represents a unique style of cumbia, one that is more romantic, tropical, and testimonial. The group is very adamant that their style is NOT to be confused with cumbia villera, which deals more with themes of drugs, partying, and the street. Agrupación Marilyn’s songs tell the story of everyday life, of violence, abuse, pain and suffering, but also love. Agrupación Marilyn was born in 2006 and is composed of lead singer, Juan Oscar Rivarola “Juancito” and songwriter, Santiago Ismael Torres (El Lechuga). The group’s band is made up by vocalist, Cristian Rivarola (El Gallo), Arturo Colliva (El Turco) on the keyboard, bass

player, Gastón Gamarra, Mauricio Oyola (Maury) on the timbales, “El Toti” on the drums, and guitarist, Cristian Gamarra (El Changa). 2006 was a big year for the group. Not only did it mark the group’s formation, it was also the year they made their first television debut on the popular Argentine TV series, Pasión de sábado. The appearance achieved the group widespread popularity throughout Argentina, and they began performing live at local dance venues, including Teatro Gran Rex in Buenos Aires alongside Argentine cumbia sensations El Original, Junior, and Los Chicos de Black. That same year, under the record label, Barca Discos, the group released their first album, Historias, which contained 13 tracks, including their hit single, “Su Florcita”, a song which tells the true story of a little girl who was sexually abused and murdered in the city of José C Paz, a

The group has performed throughout Argentina, and in 2012, they toured Peru with “La gira Marilyn Tour Verano 2012 en el Perú” in which they serenaded fans in cities including Lima, Cañete, Chinca, Ica, Nazca, Ayacucho, La merced, Pichanaki, Oxapampa, and Huanuco. Agrupación Marilyn is currently on tour and will be making its way to the DMV. They will be performing Friday, December 5, 2014 at The Palace Night Club, 13989 Jefferson Davis Hwy, Woodbridge, Virginia 22191. Doors open at 9:00 pm and the show is scheduled to start after 10:30pm. Early bird VIP tickets are available for $35, with private bar and VIP standing near stage. General admission tickets are $25. For more information, or to purchase tickets, visit, https://www.tickeri.com/. █