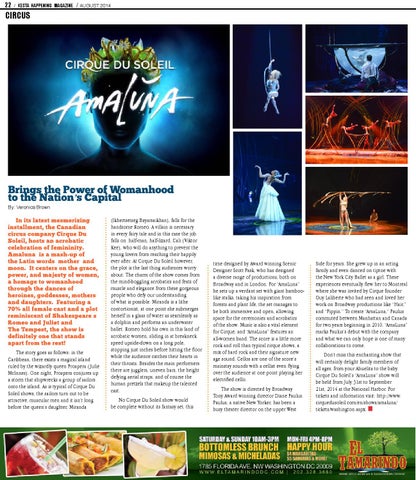 The story goes as follows: in the Caribbean, there exists a magical island ruled by the wizardly queen Prospera ( Julie McInnes). One night, Prospera conjures up a storm that shipwrecks a group of sailors onto the island. As is typical of Cirque Du Soleil shows, the sailors turn out to be attractive, muscular men and it isn’t long before the queen’s daughter, Miranda

(Ikhertsetseg Bayarsaikhan), falls for the handsome Romeo. A villain is necessary in every fairy tale and in this case the job falls on half-man, half-lizard, Cali ( Viktor Kee), who will do anything to prevent the young lovers from reaching their happily ever after. At Cirque Du Soleil however, the plot is the last thing audiences worry about. The charm of the show comes from the mind-boggling acrobatics and feats of muscle and elegance from these gorgeous people who defy our understanding of what is possible. Miranda is a lithe contortionist, at one point she submerges herself in a glass of water as seamlessly as a dolphin and performs an underwater ballet. Romeo hold his own in this land of acrobatic women, sliding in at breakneck speed upside-down on a long pole, stopping just inches before hitting the floor while the audience catches their hearts in their throats. Besides the main performers there are jugglers, uneven bars, the height defying aerial straps, and of course the human pretzels that makeup the talented cast. No Cirque Du Soleil show would be complete without its fantasy set, this

time designed by Award winning Scenic Designer Scott Pask, who has designed a diverse range of productions, both on Broadway and in London. For “AmaLuna” he sets up a verdant set with giant bamboolike stalks, taking his inspiration from forests and plant life, the set manages to be both immersive and open, allowing space for the ceremonies and acrobatics of the show. Music is also a vital element for Cirque, and “AmaLuna” features an all-women band. The score is a little more rock and roll than typical cirque shows, a mix of hard rock and their signature new age sound. Cellos are one of the score’s mainstay sounds with a cellist even flying over the audience at one point playing her electrified cello. The show is directed by Broadway Tony Award winning director Diane Paulus. Paulus, a native New Yorker, has been a busy theater director on the upper West

Side for years. She grew up in an acting family and even danced on tiptoe with the New York City Ballet as a girl. These experiences eventually flew her to Montreal where she was invited by Cirque founder Guy Laliberte who had seen and loved her work on Broadway productions like “Hair,” and “Pippin.” To create “AmaLuna,” Paulus commuted between Manhattan and Canada for two years beginning in 2010. “AmaLuna” marks Paulus’s debut with the company and what we can only hope is one of many collaborations to come. Don’t miss this enchanting show that will certainly delight family members of all ages, from your Abuelita to the baby. Cirque Du Soleil’s “AmaLuna” show will be held from July 31st to September 21st, 2014 at the National Harbor. For tickets and information visit: http://www. cirquedusoleil.com/en/shows/amaluna/ tickets/washington.aspx. █