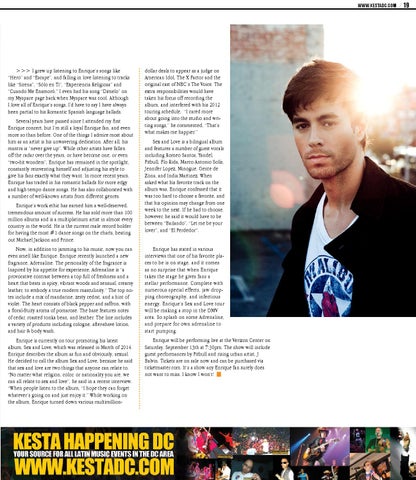 >>> I grew up listening to Enrique’s songs like “Hero” and “Escape”, and falling in love listening to tracks like “Sirena”, “Sólo en Ti”, “Experiencia Religiosa” and “Cuando Me Enamoró.” I even had his song “Dimelo” on my Myspace page back when Myspace was cool. Although I love all of Enrique’s songs, I’d have to say I have always been partial to his Romantic Spanish language ballads. Several years have passed since I attended my first Enrique concert, but I’m still a loyal Enrique fan, and even more so than before. One of the things I admire most about him as an artist is his unwavering dedication. After all, his mantra is “never give up”. While other artists have fallen off the radar over the years, or have become one, or even “two-hit wonders”, Enrique has remained in the spotlight, constantly reinventing himself and adjusting his style to give his fans exactly what they want. In more recent years, Enrique has traded in his romantic ballads for more edgy and high tempo dance songs. He has also collaborated with a number of well-known artists from different genres. Enrique’s work ethic has earned him a well-deserved, tremendous amount of success. He has sold more than 100 million albums and is a multiplatinum artist in almost every country in the world. He is the current male record holder for having the most #1 dance songs on the charts, beating out Michael Jackson and Prince.

dollar deals to appear as a judge on American Idol, The X Factor and the original cast of NBC’s The Voice. The extra responsibilities would have taken his focus off recording the album, and interfered with his 2012 touring schedule. “I cared more about going into the studio and writing songs,” he commented, “That’s what makes me happier.” Sex and Love is a bilingual album and features a number of guest vocals including Romeo Santos, Yandel, Pitbull, Flo Rida, Marco Antonio Solís, Jennifer Lopez, Minogue, Gente de Zona, and India Martinez. When asked what his favorite track on the album was, Enrique confessed that it was too hard to choose a favorite, and that his opinion may change from one week to the next. If he had to choose, however, he said it would have to be between “Bailando”, “Let me be your lover”, and “El Perdedor”.

Now, in addition to jamming to his music, now you can even smell like Enrique. Enrique recently launched a new fragrance, Adrenaline. The personality of the fragrance is Inspired by his appetite for experience, Adrenaline is “a provocative contrast between a top full of freshness and a heart that beats in spicy, vibrant woods and sensual, creamy leather, to embody a true modern masculinity.” The top notes include a mix of mandarine, zesty cedrat, and a hint of violet. The heart consists of black pepper and saffron, with a floral-fruity aroma of pomarose. The base features notes of cedar, roasted tonka bean, and leather. The line includes a variety of products including cologne, after-shave lotion, and hair & body wash.

Enrique has stated in various interviews that one of his favorite places to be is on stage, and it comes as no surprise that when Enrique takes the stage he gives fans a stellar performance. Complete with numerous special effects, jaw dropping choreography, and infectious energy. Enrique’s Sex and Love tour will be making a stop in the DMV area. So splash on some Adrenaline, and prepare for own adrenaline to start pumping.

Enrique is currently on tour promoting his latest album, Sex and Love, which was released in March of 2014. Enrique describes the album as fun and obviously, sexual. He decided to call the album Sex and Love, because he said that sex and love are two things that anyone can relate to. “No matter what religion, color, or nationality you are, we can all relate to sex and love”, he said in a recent interview. “When people listen to the album, “I hope they can forget whatever’s going on and just enjoy it.” While working on the album, Enrique turned down various multimillion-

Enrique will be performing live at the Verizon Center on Saturday, September 13th at 7:30pm. The show will include guest performances by Pitbull and rising urban artist, J Balvin. Tickets are on sale now and can be purchased via ticketmaster.com. It’s a show any Enrique fan surely does not want to miss. I know I won’t! █