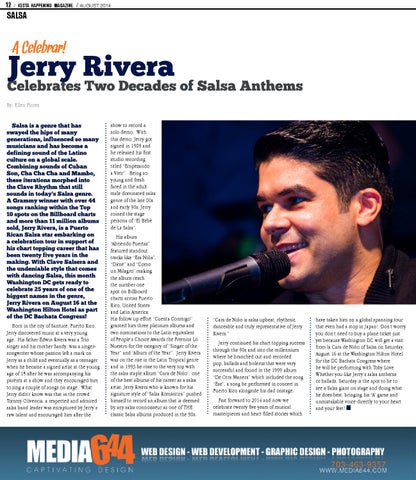 By: Ellen Flores show to record a solo demo. With this demo, Jerry got signed in 1989 and he released his first studio recording titled “Empezando a Vivir”. Being so young and fresh faced in the adult male dominated salsa genre of the late 80s and early 90s, Jerry coined the stage persona of “El Bebé de La Salsa”.

Born in the city of Santuce, Puerto Rico, Jerry discovered music at a very young age. His father Edwin Rivera was a Trio singer and his mother Sandy, was a singersongwriter whose passion left a mark on Jerry as a child and eventually as a teenager when he became a signed artist at the young age of 15 after he was accompanying his parents at a show and they encouraged him to sing a couple of songs on stage. What Jerry didn’t know was that in the crowd Tommy Olivencia, a respected and admired salsa band leader was enraptured by Jerry’s raw talent and encouraged him after the

His album “Abriendo Puertas” featured standout tracks like “Esa Niña”, “Dime” and “Como un Milagro” making the album reach the number one spot on Billboard charts across Puerto Rico, United States and Latin America. His follow up effort “Cuenta Conmigo” granted him three platinum albums and two nominations to the Latin equivalent of People’s Choice Awards the Premios Lo Nuestro for the category of “Singer of the Year” and “Album of the Year”. Jerry Rivera was on the rise in the Latin Tropical genre and in 1993 he rose to the very top with the salsa staple album “Cara de Niño”, one of the best albums of his career as a salsa artist. Jerry Rivera who is known for his signature style of “Salsa Romántica” pushed himself to record an album that is deemed by any salsa connoisseur as one of THE classic Salsa albums produced in the 90s.

“Cara de Niño is salsa upbeat, rhythmic, danceable and truly representative of Jerry Rivera.” Jerry continued his chart topping success through the 90s and into the millennium where he branched out and recorded pop, ballads and boleros that were very successful and found in the 1999 album “De Otra Manera” which included the song “Ese”, a song he performed in concert in Puerto Rico alongside his dad onstage. Fast forward to 2014 and now we celebrate twenty five years of musical masterpieces and heart filled stories which

have taken him on a global spanning tour that even had a stop in Japan! Don’t worry you don’t need to buy a plane ticket just yet because Washington DC will get a visit from la Cara de Niño of Salsa on Saturday, August 16 at the Washington Hilton Hotel for the DC Bachata Congress where he will be performing with Toby Love. Whether you like Jerry’s salsa anthems or ballads, Saturday is the spot to be to see a Salsa giant on stage and doing what he does best, bringing his “A” game and unmistakable voice directly to your heart and your feet! █