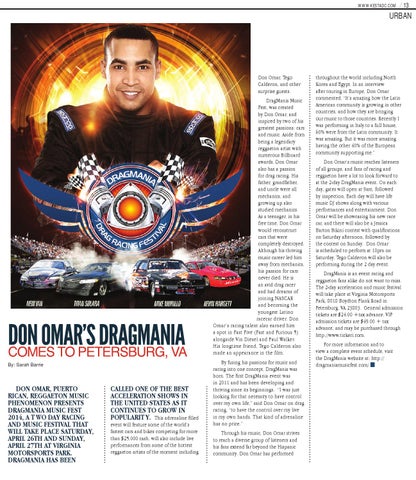 Don Omar, Tego Calderon, and other surprise guests. DragMania Music Fest, was created by Don Omar, and inspired by two of his greatest passions: cars and music. Aside from being a legendary reggaeton artist with numerous Billboard awards, Don Omar also has a passion for drag racing. His father, grandfather, and uncle were all mechanics, and growing up also studied mechanics. As a teenager, in his free time, Don Omar would reconstruct cars that were completely destroyed. Although his thriving music career led him away from mechanics, his passion for cars never died. He is an avid drag racer and had dreams of joining NASCAR and becoming the youngest Latino racecar driver. Don Omar’s racing talent also earned him a spot in Fast Five (Fast and Furious 5) alongside Vin Diesel and Paul Walker. His longtime friend, Tego Calderon also made an appearance in the film. By: Sarah Barrie

CALLED ONE OF THE BEST ACCELERATION SHOWS IN THE UNITED STATES AS IT CONTINUES TO GROW IN POPULARIT Y. This adrenaline filled

event will feature some of the world’s fastest cars and bikes competing for more than $25,000 cash, will also include live performances from some of the hottest reggaeton artists of the moment including

By fusing his passions for music and racing into one concept, DragMania was born. The first DragMania event was in 2011 and has been developing and thriving since its beginnings. “I was just looking for that necessity to have control over my own life,” said Don Omar on drag racing, “to have the control over my live in my own hands. That kind of adrenaline has no price.” Through his music, Don Omar strives to reach a diverse group of listeners and his fans extend far beyond the Hispanic community. Don Omar has performed

throughout the world including North Korea and Egypt. In an interview after touring in Europe, Don Omar commented, “It’s amazing how the Latin American community is growing in other countries, and how they are bringing our music to those countries. Recently I was performing in Italy to a full house, 60% were from the Latin community. It was amazing. But it was more amazing having the other 40% of the European community supporting me.” Don Omar’s music reaches listeners of all groups, and fans of racing and reggaeton have a lot to look forward to at the 2-day DragMania event. On each day, gates will open at 9am, followed by inspection. Each day will have life music DJ shows along with various performances and entertainment. Don Omar will be showcasing his new race car, and there will also be a Jessica Barton Bikini contest with qualifications on Saturday afternoon, followed by the contest on Sunday. Don Omar is scheduled to perform at 10pm on Saturday. Tego Calderon will also be performing during the 2 day event. DragMania is an event racing and reggaeton fans alike do not want to miss. The 2-day acceleration and music festival will take place at Virginia Motorsports Park, 8018 Boydton Plank Road in Petersburg, VA 23803. General admission tickets are $24.00 +tax advance. VIP admission tickets are $49.00 + tax advance, and may be purchased through http://www.tickeri.com. For more information and to view a complete event schedule, visit the DragMania website at: http:// dragmaniamusicfest.com/ █