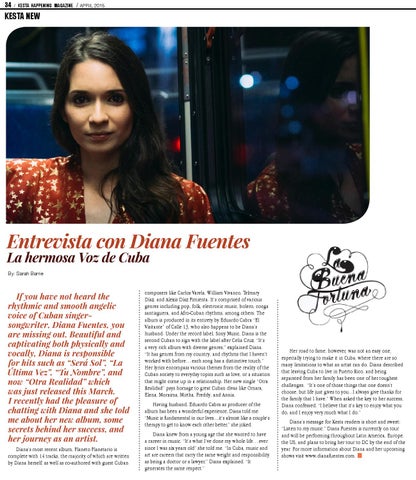 composers like Carlos Varela, William Vivanco, Telmary Díaz, and Alexis Díaz Pimienta. It’s comprised of various genres including pop, folk, electronic music, bolero, conga santiaguera, and Afro-Cuban rhythms, among others. The album is produced in its entirety by Eduardo Cabra “El Visitante” of Calle 13, who also happens to be Diana’s husband. Under the record label, Sony Music, Diana is the second Cuban to sign with the label after Celia Cruz. “It’s a very rich album with diverse genres,” explained Diana. “It has genres from my country, and rhythms that I haven’t worked with before…each song has a distinctive touch.” Her lyrics encompass various themes from the reality of the Cuban society to everyday topics such as love, or a situation that might come up in a relationship. Her new single “Otra Realidad” pays homage to great Cuban divas like Omara, Elena, Moraima, Mirtha, Freddy, and Annia. Having husband, Eduardo Cabra as producer of the album has been a wonderful experience, Diana told me. “Music is fundamental in our lives....it’s almost like a couple’s therapy to get to know each other better,” she joked.

Diana’s most recent album, Planeto Planetario is complete with 14 tracks, the majority of which are written by Diana herself, as well as co-authored with guest Cuban

Diana knew from a young age that she wanted to have a career in music. “It’s what I’ve done my whole life…ever since I was six years old” she told me. “In Cuba, music and art are careers that carry the same weight and responsibility as being a doctor or a lawyer,” Diana explained. “It generates the same respect.”

Her road to fame, however, was not an easy one, especially trying to make it in Cuba, where there are so many limitations to what an artist can do. Diana described that leaving Cuba to live in Puerto Rico, and being separated from her family has been one of her toughest challenges. “It’s one of those things that one doesn’t choose, but life just gives to you...I always give thanks for the family that I have.” When asked the key to her success, Diana confessed, “I believe that it’s key to enjoy what you do, and I enjoy very much what I do.” Diana’s message for Kesta readers is short and sweet: “Listen to my music.” Diana Fuentes is currently on tour and will be performing throughout Latin America, Europe, the US, and plans to bring her tour to DC by the end of the year. For more information about Diana and her upcoming shows visit www.dianafuentes.com. █