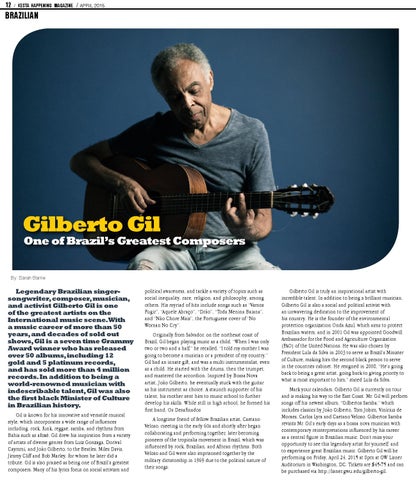 political awareness, and tackle a variety of topics such as social inequality, race, religion, and philosophy, among others. His myriad of hits include songs such as “Vamos Fugir”, “Aquele Abraço”, “Drão”, “Toda Menina Baiana”, and “Não Chore Mais”, the Portuguese cover of “No Woman No Cry”.

Gil is known for his innovative and versatile musical style, which incorporates a wide range of influences including, rock, funk, reggae, samba, and rhythms from Bahia such as afoxé. Gil drew his inspiration from a variety of artists of diverse genres from Luiz Gonzaga, Dorival Caymmi, and João Gilberto, to the Beatles, Miles Davis, Jimmy Cliff and Bob Marley, for whom he later did a tribute. Gil is also praised as being one of Brazil’s greatest composers. Many of his lyrics focus on social activism and

Originally from Salvador, on the northeast coast of Brazil, Gil began playing music as a child. “When I was only two or two and a half,” he recalled, “I told my mother I was going to become a musician or a president of my country.” Gil had an innate gift, and was a multi instrumentalist, even as a child. He started with the drums, then the trumpet, and mastered the accordion. Inspired by Bossa Nova artist, João Gilberto, he eventually stuck with the guitar as his instrument as choice. A staunch supporter of his talent, his mother sent him to music school to further develop his skills. While still in high school, he formed his first band, Os Desafinados A longtime friend of fellow Brazilian artist, Caetano Veloso, meeting in the early 60s and shortly after began collaborating and performing together, later becoming pioneers of the tropicalia movement in Brazil, which was influenced by rock, Brazilian, and African rhythms. Both Veloso and Gil were also imprisoned together by the military dictatorship in 1969 due to the political nature of their songs.

Gilberto Gil is truly an inspirational artist with incredible talent. In addition to being a brilliant musician, Gilberto Gil is also a social and political activist with an unwavering dedication to the improvement of his country. He is the founder of the environmental protection organization Onda Azul, which aims to protect Brazilian waters, and in 2001 Gil was appointed Goodwill Ambassador for the Food and Agriculture Organization (FAO) of the United Nations. He was also chosen by President Lula da Silva in 2003 to serve as Brazil’s Minister of Culture, making him the second black person to serve in the countries cabinet. He resigned in 2008, “He’s going back to being a great artist, going back to giving priority to what is most important to him,” stated Lula da Silva. Mark your calendars. Gilberto Gil is currently on tour and is making his way to the East Coast. Mr. Gil will perform songs off his newest album, “Gilbertos Samba,” which includes classics by João Gilberto, Tom Jobim, Vinícius de Moraes, Carlos Lyra and Caetano Veloso. Gilbertos Samba revisits Mr. Gil’s early days as a bossa nova musician with contemporary reinterpretations influenced by his career as a central figure in Brazilian music. Don’t miss your opportunity to see this legendary artist for yourself, and to experience great Brazilian music. Gilberto Gil will be performing on Friday, April 24, 2015 at 8pm at GW Lisner Auditorium in Washington, DC. Tickets are $45-75 and can be purchased via http://lisner.gwu.edu/gilberto-gil.