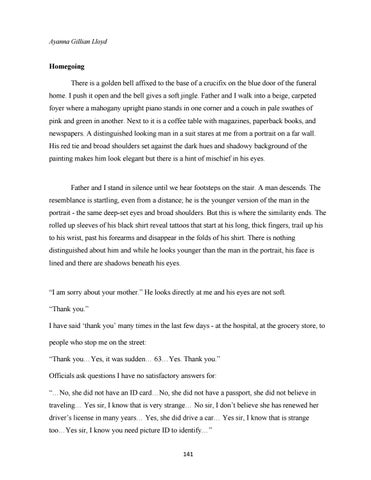 Homegoing There is a golden bell affixed to the base of a crucifix on the blue door of the funeral home. I push it open and the bell gives a soft jingle. Father and I walk into a beige, carpeted foyer where a mahogany upright piano stands in one corner and a couch in pale swathes of pink and green in another. Next to it is a coffee table with magazines, paperback books, and newspapers. A distinguished looking man in a suit stares at me from a portrait on a far wall. His red tie and broad shoulders set against the dark hues and shadowy background of the painting makes him look elegant but there is a hint of mischief in his eyes.

Father and I stand in silence until we hear footsteps on the stair. A man descends. The resemblance is startling, even from a distance; he is the younger version of the man in the portrait - the same deep-set eyes and broad shoulders. But this is where the similarity ends. The rolled up sleeves of his black shirt reveal tattoos that start at his long, thick fingers, trail up his to his wrist, past his forearms and disappear in the folds of his shirt. There is nothing distinguished about him and while he looks younger than the man in the portrait, his face is lined and there are shadows beneath his eyes.

“I am sorry about your mother.” He looks directly at me and his eyes are not soft. “Thank you.” I have said ‘thank you’ many times in the last few days - at the hospital, at the grocery store, to people who stop me on the street: “Thank you…Yes, it was sudden… 63…Yes. Thank you.” Officials ask questions I have no satisfactory answers for: “…No, she did not have an ID card…No, she did not have a passport, she did not believe in traveling… Yes sir, I know that is very strange… No sir, I don’t believe she has renewed her driver’s license in many years… Yes, she did drive a car… Yes sir, I know that is strange too…Yes sir, I know you need picture ID to identify…” 141