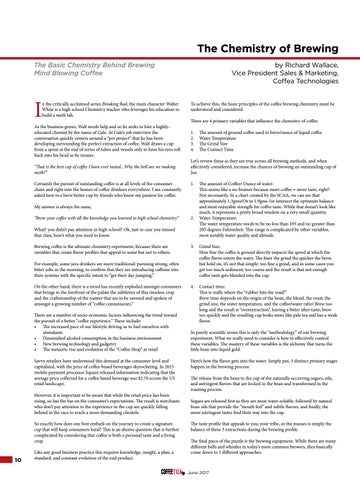 As the business grows, Walt needs help and so he seeks to hire a highlyeducated chemist by the name of Gale. At Gale’s job interview the conversation quickly centers around a “pet project” that he has been developing surrounding the perfect extraction of coffee. Walt draws a cup from a spout at the end of series of tubes and vessels only to have his eyes roll back into his head as he moans: “That is the best cup of coffee I have ever tasted...Why the hell are we making meth?” Certainly the pursuit of outstanding coffee is at all levels of the consumer chain and right into the homes of coffee drinkers everywhere. I am constantly asked how to a brew better cup by friends who know my passion for coffee. My answer is always the same, “Brew your coffee with all the knowledge you learned in high school chemistry” What? you didn’t pay attention in high school? Ok, just in case you missed that class, here’s what you need to know. Brewing coffee is the ultimate chemistry experiment, because there are variables that create flavor profiles that appeal to some but not to others. For example, some java drinkers are more traditional: pursuing strong, often bitter jolts in the morning, to confirm that they are introducing caffeine into their systems with the specific intent to “get their day jumping.” On the other hand, there is a trend has recently exploded amongst consumers that brings to the forefront of the palate the subtleties of this timeless crop and the craftsmanship of the roaster that are to be savored and spoken of amongst a growing number of “coffee connoisseurs.” There are a number of socio-economic factors influencing the trend toward the pursuit of a better “coffee experience.” These include: • The increased pace of our lifestyle driving us to fuel ourselves with stimulants • Diminished alcohol consumption in the business environment • New brewing technology and gadgetry • The meteoric rise and evolution of the “Coffee Shop” at retail Savvy retailers have understood this demand at the consumer level and capitalised, with the price of coffee-based beverages skyrocketing. In 2015 mobile payment processor Square released information indicating that the average price collected for a coffee based beverage was $2.70 across the US retail landscape. However, it is important to be aware that while the retail price has been rising, so has the bar on the consumer’s expectations. The result is merchants who don’t pay attention to the experience in the cup are quickly falling behind in the race to reach a more demanding clientele. So exactly how does one best embark on the journey to create a signature cup that will keep consumers loyal? This is an elusive question that is further complicated by considering that coffee is both a personal taste and a living crop.

Like any good business practice this requires knowledge, insight, a plan, a standard, and constant evolution of the end product.

by Richard Wallace, Vice President Sales & Marketing, Coffea Technologies To achieve this, the basic principles of the coffee brewing chemistry must be understood and considered. There are 4 primary variables that influence the chemistry of coffee. 1. 2. 3. 4.

Let’s review these as they are true across all brewing methods, and when effectively considered, increase the chances of brewing an outstanding cup of Joe. 1. The amount of Coffee/ Ounce of water: This seems like a no-brainer because more coffee = more taste, right? Not necessarily. In a chart created by the SCAA, we can see that approximately 1.3gms/Oz to 1.9gms /oz intersect the optimum balance and most enjoyable strength for coffee taste. While that doesn’t look like much, it represents a pretty broad window on a very small quantity. 2. Water Temperature: The water temperature needs to be no less than 195 and no greater than 205 degrees Fahrenheit. This range is complicated by other variables, most notably water quality and altitude. 3. Grind Size: How fine the coffee is ground directly impacts the speed at which the coffee flavor enters the water. The finer the grind the quicker the brew, but hold on, it’s not that simple: too fine a grind, and in some cases you get too much sediment; too coarse and the result is that not enough coffee taste gets blended into the cup. 4. Contact time: This is really where the “rubber hits the road!” Brew time depends on the origin of the bean, the blend, the roast, the grind size, the water temperature, and the coffee/water ratio! Brew too long and the result is “overextraction”, leaving a bitter after-taste; brew too quickly and the resulting cup looks more like pale tea and has a weak flavor. In purely scientific terms this is only the “methodology” of our brewing experiment. What we really need to consider is how to effectively control these variables. The mastery of these variables is the alchemy that turns the little bean into liquid gold. Here’s how the flavor gets into the water. Simply put, 3 distinct primary stages happen in the brewing process: The release from the bean to the cup of the naturally occurring sugars, oils, and astringent flavors that are locked in the bean and transformed in the roasting process. Sugars are released first as they are most water-soluble, followed by natural bean oils that provide the “mouth feel” and subtle flavors, and finally, the more astringent tastes find their way into the cup. The taste profile that appeals to you, your tribe, or the masses is simply the balance of these 3 extractions during the brewing profile. The final piece of the puzzle is the brewing equipment. While there are many different bells and whistles in today’s most common brewers, they basically come down to 3 different approaches. 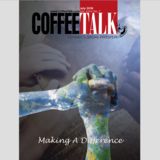 INFORMATION IS POWER - Do you know as much as your competition? Do NOT give them the competitive advantage! CoffeeTalk makes it easy to stay...

INFORMATION IS POWER - Do you know as much as your competition? Do NOT give them the competitive advantage! CoffeeTalk makes it easy to stay...